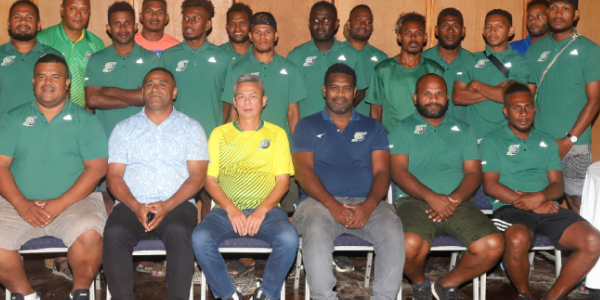 SIFF President William Lai hosted a homecoming dinner last night for the Solomon Islands national futsal team, Kurukuru after returning from the OFC Futsal Cup 2022 as runners-up and he lays out SIFF’s plans for the Oceania champions leading up to the next FIFA Futsal World Cup qualifiers next year.

Solomon Islands sent a development team to compete in the OFC Futsal Cup as part of the transition for the national team.

The team of 13 players and five officials arrived back into the country this week and the SIFF president hosted the dinner to acknowledge their efforts in representing the country well at the international level finishing second behind rivals New Zealand.

President Lai laydown plans for Kurukuru as the ambition is to qualify for a record 5th World Cup appearance.

He highlighted that players need to perform in the domestic league since a selection panel will pick players from the Super Futsal League for the next Kurukuru training squad and final selection is at the President’s Futsal Championship in December.

“All selected players will be signing a 9-month contract with SIFF leading up to the World Cup qualifiers and will get monthly allowance,” he revealed.

“The team will also compete in internal and international tournaments in and outside of Solomon Islands.

“Our aim is to host the World Cup qualifiers here and we’ve already applied to host.”

SIFF hired an expert to do assessed the team during the recent OFC Futsal Cup and an independent report on how to prepare the national futsal team will be table in a SIFF executive meeting.

On the technical side, SIFF is looking to hire a full-time foreign coach for 5 months to guide Kurukuru going forward.

Meanwhile, a token of appreciation of $20,000.00 from Government Ministers was presented to the team by MP for east Guadalcanal Constituency and Minister for Mines, Energy and Rural Electrification, Ho. Bradley Tovosia and MP for North Malaita, Hon. Stanley Filualea

Solomon Islands Ports Authority (SIPA) also pledge to give a token of appreciation to the team.

SIFF is looking to work closely with stakeholders and other government to achieve the target of the 5th FIFA Futsal World Cup appearance on the world stage.