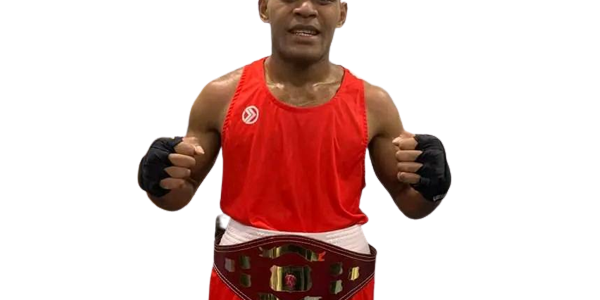 Through hard work and determination to do well in the sport, Lemuel Silisia went on to become a champion after winning the Northern NSW Welterweight ( 67Kg ) division title.

The energetic Lemuel Silisia who is part of the PALM scheme worker is creating history for himself and also for the Solomon Islands boxing by being the New Welterweight champion for Northern NSW.

The 25 years old Labour Mobility Scheme (LMS) worker beat his opponent, Luke Ugov of Castle Hill by technical knockout in the third round of the 67kg weight category title fight at the Raymond Terrace Bowling Club.

“Winning this title definitely gives me the feeling of accomplishment and satisfaction.

“Tomorrow I’ll get back into it and start working all over again and setting new goals,” he said.

Previously in the month of March this year, the flamboyant Solomon Islands boxer lost his first bout and told Solomon Star newspaper that one of the contributing factor was due to his Australian opponent weighing more than him.

Instead of being downhearted and also discouraged by few social media comments speaking negative of him, the exciting and motivated young man took his trainings seriously and aimed to go beyond his current status then.

“My goal is to become the best here and learn more from boxing and hope to come back and teach more kids about boxing.

“We need to be aiming for gold in the big games around the region so I hope I can be part of a team to aspire to achieve greatness,” Lemuel uttered.

Lemuel is grateful to be part of the season scheme that gave him the opportunity to continue excel in the sport he loves.

“I would like to thank the Australian Government for this opportunity to come and work here.

“I am helping my family and community back home and also enjoying my boxing here,” he stressed.

Excitement and happiness was part of the emotion Silisia felt but more importantly, he dedicated his technical knockout win to his late father, siblings and mum.

“I dedicate my win to my late father Colson Silisia, my little brother and mum, “an emotionally Silisia stated.

Silisa also encouraged young youths who may also notice his special victory to be determined and continue praying.

“My secret to my success I guess is to continue working hard, good dedication and always remember God in everything,” he added.