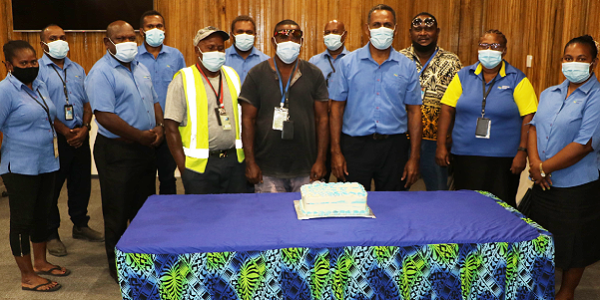 Despite the surging threat of Covid-19, a simple but touching ceremony was held at the SIPA Auditorium, to recognize  and acknowledge the staff for their long service and dedication to the Port over the years.

They retirees were presented with certificates of recognition by the Human Resources Department and SIPA management  representatives. A small refreshment and cutting of a farewell cake was also done to mark the occasion.

The three retires were also took the time and opportunity to share a few words on their experience with SIPA over the  years, and thanking the Port for it’s support to them and their families over the years.

Due to Covid-19 restrictions, a limited number of staff were only present to witness the occasion, where the retirees were  given the honor of delivering speeches, reflecting on their journey with the port for the last 40 years.

SIPA’s Chief Financial Officer, Mr. Georgia Rausi was given the honour of giving the official acknowledgement on  behalf of the Port to the retirees for their long service.

He said although the event was small, it was very meaningful in recognizing the retirees’ contribution to SIPA. He said the three retirees have displayed ‘distinction, loyalty, and dedication’ to the port for the past decades, which has  seen them rise above their ranks over the years.

“You can’t last in any company if you don’t perform, or follow the work culture, or what the company expects of you,  but I’m very happy to say that these three retirees have served the port faithfully which has seen them stay that long until  today,” he said.

“You have seen the Port’s transformation, and development over the years and decades, and you are part of these  changes, so you are able to leave the port today with your heads held high, because you have served SIPA faithfully  through your work ethic,” he said.

Mr. Rausi then acknowledged the retirees on behalf of the board management and staff of SIPA, for their dedication and  contribution to the port.

SIPA’s Human Resources Manager Rolland Delemani also gave his acknowledgment on behalf of the SIPA’s HR  Department to the retirees, thanking them for their service and good record with the Port.

The retirees are set to retire this month, as this week will be their last week with the Port.