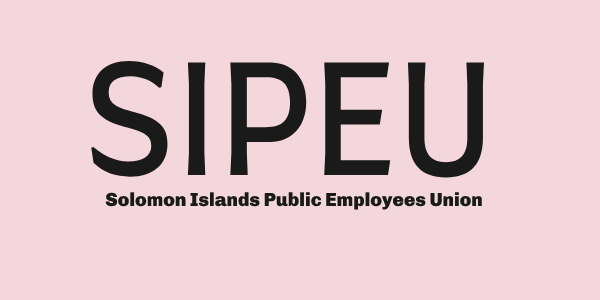 Are the executives of SIPEU protecting the interest of their members?

UNTIL now no one suspects anything amiss about the Solomon Islands Public Employees Union (SIPEU) – a body set up to protect and advance the rights and interests of thousands of its members.

Now some of SIPEU’s executive members are under thick smog.

Amongst these, are issues of conflict of interest and payment of fees, which could be illegal, according to a former General Secretary, Clement Waiwori.

Waiwori who served as General Secretary of SIPEU for eighteen years, said he knows of two executive board members – one at Permanent Secretary level and the other an Immigration official.

“The public servant at permanent secretary level collects $1, 000 in SIPEU fees every fortnight since 2013.

“This payment is tax-free and on the basis of these payments, the permanent secretary guy would have easily collected more than $230, 000 over the past 10 years,” Mr Waiwori said.

“His wife would call in to collect the payment when he was busy,” Mr Waiwori recalled.

“The other public servant collects $800 a fortnight since 2013

This fee too is tax-free and this means that the officer would have collected easily more than $187, 000 in SIPEU fees,” he said.

“Given that their appointments were for two years only, the fees they received over the past eight years could be illegal.

“The issue of conflict of interest also comes into focus – whose interests are these board members serving – government’s or members of SIPEU?

“Both are senior public servants and obviously they have done nothing to advance the interests of members whose number has dwindled particularly since COVID-19 pandemic.”

The new General Secretary Robert Au has also come in for flogging.

“That man was sacked why was he brought back in,” Waiwori said, adding he was getting $3, 000 in fortnightly salary as well as rented accommodation at $5, 000 a month.

What is he doing to sort out the mess in there?

Last year, Mr Au announced a survey to establish the number of public servants affected by the pandemic but no results have been made known.

“That is because he never showed up in the office to do his work – the same thing he was sacked for previously.”