You are here:
FeaturesFeatures - WomenNews - National 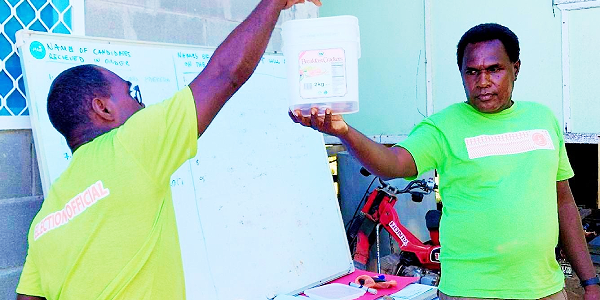 A total number of six female candidates are contesting in the upcoming provincial election in Western Province.

This came after the closure of nomination last week and the announcement of the total number of candidates in Western Province have been made public by the Solomon Island Electoral Commission (SIEC).

These women candidates are contesting in their respective ward.

Three females are; from Shortland Island constituency, one from Outer Shortland Ward 1, Petsy Kimisi and two from Inner Shortlands they are Francesca O’Grady and Roselyn Laore

Given the situation, many registered voters and public have also high hopes for women to win a seat at the provincial assembly of the Western Provincial Government (WPG)

However, some said the current election is anybody’s game depending on the leadership style that former and the intending candidates have displayed.

A former MPA and a retired Government officer told this paper yesterday  that  to became a politician, one must play well his or her cards, know what he/she is talking about and prepared well his or her visions and plans.

In an interview with the Solomon Star, a Retired Government officer who declined to reveal his identity said, its only by chance a woman can win the race.

However, the officer said it will be great to see more women participating in the Provincial Election and so as the gender wise is also upholding the integrity of the democracy government of Western Province.

“But to take the seat in the Provincial Assembly, and address and voice the needs for her/his people back in his/her home or Constituency is another story.

“False promises always made by Politicians rather helping their people instead, they are the one that benefits from the resources that should be invested for the community and people.

“And this happened all the time and so the political influence pattern keep repeating itself,” the officer said.

The officer added whether male or female wins the seat in the new provincial government, a good leader that displayed good quality can brought quality leadership, quality and fair choice and decisions to serve the government and the people of his island.

Meanwhile campaign period is open until the day before the polling day on December 15th 2022.

The new Premier of Western Province and the Province Assembly should be announced next year in January 2023.