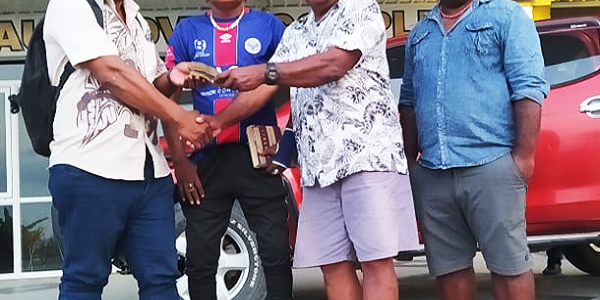 The handing over was held on Friday at the National Parliament Office.

Receiving the money was the Waneagu FC President Wilson Orisi.

He acknowledged MP Sifu for the timely donation.

“The donation boost the morale of the players and management because the money will support the team as the TSL first round is ready to come to an end,” he said.

Orisi also acknowledges MP for West Kwaio Titus Fika for his financial support towards the team.

He also thanked other major sponsors whom he couldn’t name which also supported Waneagu FC from the starting of the TSL until now.

“Waneagu FC is a team for the people of Kwaio.

“It is formed to expose soccer talents of youths in Kwaio, we believe on our players because they are our ambassador and role model for our new and generation of youths to come,” he said.

He said Kwaio people are so proud of their two football ambassadors Micah Lea’alafa and Rafael Lea’i. They are the sons of Kwaio.

“We formed Waneagu FC to produce players like Micah and Rafael and also to tell people that we are good people,” he said.

Orisi said Waneagu FC has made East and West Kwai’io one despite of political boundaries.