SOLOMON AIRLINES BOARD TO DECIDE FUTURE OF DASH-8 PLANE 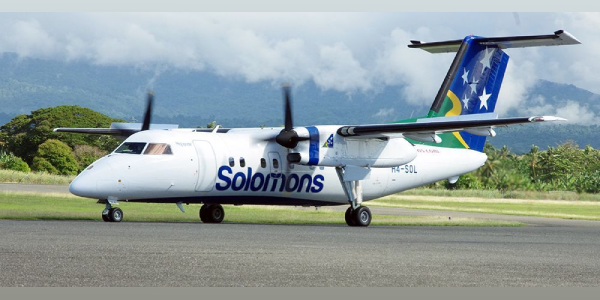 THE Board of Solomon Airlines will this week decide the future of the national carrier’s sole Dash-8 aircraft, Chairman Frank Wickham confirmed yesterday.

Mr. Wickham was responding on a front-page story in the Solomon Star yesterday, which suggests the Airlines is planning to sell off the 36-seater plane – the largest in Solomon Airlines domestic fleet.

Sources told Solomon Star the planned sale ran counter to the Government’s major upgrade of regional aerodromes and is a backward step for the airline industry.

Chairman Frank said the government would be kept abreast with the three options being put forward by Management on the future of the Dash-8 aircraft. He denied the Airlines has owned the aircraft outright.

He said Solomon Airlines owns all three Twin Otter aircraft out right but not the Dash-8 aircraft, which is undergoing a major refit known as C-check in Perth, Western Australia.

Mr. Wickham said the Board would meet tomorrow to decide on one of three options, which Management has put forward for the Board’s consideration and decision.

The three options are to either, sell, lease or retain came out of an options’ paper which Management had developed. A Senior Management meeting last Friday endorsed the options which are now being considered by the Board on Wednesday,” Mr. Wickham said.

“As a shareholder, the government would be given the opportunity to look at the options,” he said.

On the issue of rehiring former Board Security, Bill Tyson, Mr. Wickham said Solomon Airlines is undergoing a major restructuring and Mr. Tyson had been asked to help in the restructuring.

“Bill is not being paid for doing the job except he’s been allowed to stay in a company house while he is undertaking the job,” Mr. Wickham said.