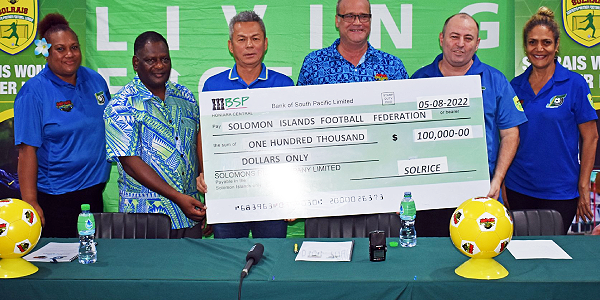 Solrais Country Manager James Bradford confirmed the sponsorship starts this year and will end in 2024.

“We are happy to commit to another three years and then we can review that after that.

“Another three years of commitment means that there is some stability in it.

“We can concentrate over the three years to keep improving year on year,” he said.

“We’ve decided to step it up each year, we know that every year changes, we’ve seen that around the world with inflation going through the roof, so it’s only fair that we committed to a certain percent increase on that sponsorship every year and we look forward to growing it.

“The greater the talent it’s worth as much as we can contribute,” Bradford said.

He said the women’s national team’s achievement in the OFC Nations Cup is the reflection of such partnership.

“SIFF is grateful that Solrais came onboard when we started.

“It’s always a pleasure to grow together as partners for the future of football for women in the Solomon Islands.

“The efforts and support from the partnership with Solrais is reflected at the OFC Womens Nations Cup tournament in Fiji recently,” Lai said.

Diana Tasion and Ronald O’Grady of the SWPL board thanked Solrais and SIFF for the partnership which will boost the development of women’s football in the country.

“We’ve seen the women’s league grow and that has only come about with the sponsorship such as Solrais and the support from SIFF.

“Through this support it gives us confidence and capability that we are to plan ahead to be able to make the league bigger and better.

“On behalf of the board we really appreciate Solrais support,” they said.

The 2022 Solrais Women’s Premier League will start on August 20th at the new football field at King George.