80 years of peace, unity and friendship celebrated at Bloody Ridge 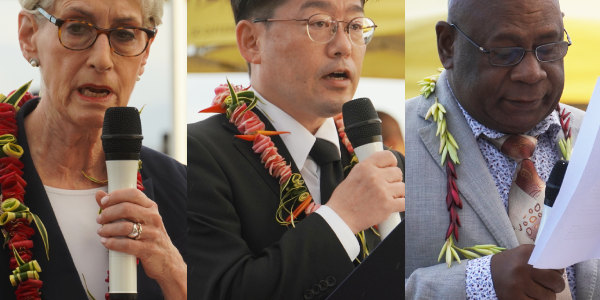 EVENTS to commemorate 80 years of peace, unity and friendship after the Second World War continued on Monday at the Bloody Ridge National Peace Park on the outskirts of Honiara.

Monday’s event coincided with the 5th anniversary of Bloody Ridge National Peace Park since its naming in 2017.

These two events were organised by the National Government through the Ministry of Culture and Tourism on the theme “Dawn of Peace, Unity and Friendship”.

Guest of honour at the dual event was Minister of Culture and Tourism Honourable Bartholomew Parapolo.

Mr Parapolo said since the end of the Second World War 80 years ago, the ideals of full democracy and peace have been embraced.

“We cannot disregard the cost of peace, unity and friendship as we remember those who dedicated their lives for this cause on this ground.

“It came with a great price.

“So, it is with mutual respect today we celebrate 80 years of peace, unity and friendship as we remember those who dedicated their lives for this cause on this ground.

“From Solomon Islands perspective, there has been a shift in focus in commemorating the war given peace, unity and friendship that dawned since the war ended 80 years ago.

“This renewed focus is our contribution to the global peace and a message to the international community that have enjoyed peace through unity and friendship that we have developed with the countries that were involved in the battle on this ground,” he said.

“It is a highly significant battleground that changed the course of war in the pacific.

“It is an icon and will continue forever significant landmark in the history of our nation.

“This site remains a sacred site to those whose loved ones fought and perished during that bloodiest battle,” he said.

Japan State Minister for Defence Hon. Makoto Oniki said during the fierce battle of Guadalcanal many precious lives were lost, those who lost their lives will forever engrave in the hearts of people of Japan.

He said after the war in Guadalcanal both sides (Japan and allied forces) have lost more than 20,000 lives.

He therefore, took the opportunity to send his condolences to relatives of those who lost their lives during the war.

“I would also extend my heart felt gratitude to the Government of Solomon Islands and those who involved in the tremendous cooperation in collecting the remains after the war,” he said.

He told the gathering that after the war Japan has been a country that value peace.

The peace we enjoy today is the sacrifice done by the fallen soldiers for both Japan and allied forces.

In her speech the Deputy Secretary of State Hon. Wendy Sherman spoke to the original land owners and the surrounding communities about the history of war in Solomon Islands but specifically in Guadalcanal.

She said the Bloody Ridge is where the US Marines fought so hard to retake the Honiara Airport during the war.

She said the war was fought in air, jungles, coastal beaches, ridges of the island of Guadalcanal.

She also told the story of a Guadalcanal scouts late Sir Jacob Vouza to the original landowners and the surrounding communities.

“Sir Vouza was a native police officer of the British Solomon Islands Protectorate, who served with the United States Marine Corps in the Guadalcanal campaign during the WWII.

“He was tortured for keeping secret information of the US and allied forces when asked by the Japanese soldiers to provide the information,” the Deputy Secretary said.

In remembrance of Sir Vouza, his statue was erected and now at the Rove Police Headquarter in Honiara.

Hon Sherman said Solomon Islanders had made critical and instrumental contribution to the course and outcome of the WWII.

In the contribution of the so-called Solomon Islands Scouts and Coastwatchers to the course of the war, United States has made a bond partnership that lasted to this year and will continue for years to come.

“United State is very proud to be a good partner and friend of Solomon Islands.

“Not because of the shared history but because of our shared values or a strong foundation for collaboration to attend and overcome challenges of today,” she said.

The commemoration at Bloody Ridge was a brief one.

After the official speeches and laying of wreaths the program ended the delegations from Solomon Islands Government, United States, Australia, New Zealand and Japan retired from the site.