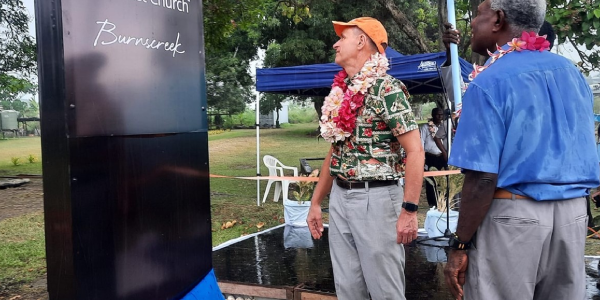 He arrived in Honiara on Monday and got a surprise warm welcome at the Honiara International Airport from a traditional warriors’ party.

He was then led to the Solomon Islands Mission (SIM) President, Dr Silent Tovosia and General Secretary, Pastor David Filo, through a colourful parade mounted by the Honiara Central District pathfinders.

Whilst in Honiara, Pastor Townend opened and attended the first day of the one-week Honiara District Meeting programme which commenced on Monday at the Kukum Church.

He will speak for the second time tonight at the Kukum SDA Church before flying out tomorrow.

Whilst in Honiara, Pastor Townend also unveiled a new sign board for Burnscreek SDA Church in East Honiara.

He was able to meet other church officers, pay visits to a number of churches and project sites in Honiara.

Pastor Townend recently visited Fiji as part of his visit to the Pacific region. He is based in Australia.

Whilst in the country, he visited parts of Honiara and the Western Province.

In the Western Province, he spoke to the large crowd that attended the evangelistic campaign at the JKF Stadium in Gizo.

He was also given the opportunity to speak to the Adventist congregation at Kukum before heading back to Suva, Fiji where he is based.

The visits by the church top officials follows the reopening of the country’s international border after a long lock-down.