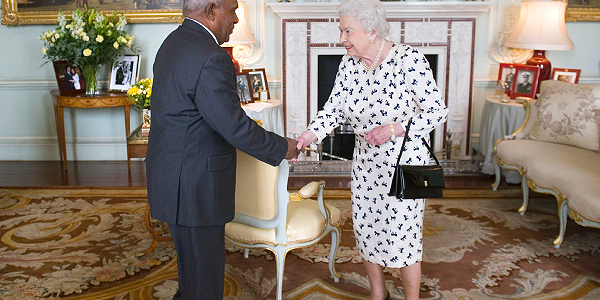 Interviewer: I heard that SIBC had contacted you to say something as a former Governor-General on this occasion of the Queen’s Platinum Jubilee

Sir Frank Kabui:  Yes but I declined as I was not sure of the protocol aspect. I however was able to get the view of Government House and thus this interview.

Interviewer: You had been Her Majesty’s Representative as Governor-General for ten years.  Have you anything to say?

Sir Frank Kabui: Her Majesty is great, great and great in her leadership and status as the Queen of Great Britain and Northern Ireland, Her Realms and Head of the Commonwealth. Her Reign for the last 70 years bears testimony to that fact. The Platinum Jubilee is the event that confirms it. This is my opinion but what about the people in the villages of this country?

In 1975, the people of this country decided to recommend to the then Constitutional Committee that Her Majesty the Queen become the Head of State. This view was enshrined in our Constitution on Independence in 1978.

Earlier in 1974, Her Majesty had visited this country for the first time. She went ashore in Namuga village in Star Harbour on Makira in the then Eastern District of the British Solomon Islands Protectorate. The Chief there gave her a traditional title for female leaders in that community, being a matrilineal society.

We scrambled to find out. We found out that the Chief had passed away only in May, 2012. The then Prime Minister quickly acted and the daughter of the Chief, accompanied by Mr. Karani, were immediately brought to Honiara by plane to brief me at Government House.

As explained to me, the candidate for the title must be wealthy, powerful, peaceful, loving and capable of resolving disputes. The qualities of that individual are likened to a rock that stands out in the sea. The waves pound it and they simply splash away. The wind, sun and the rain beat down on it and it does feel them. It is powerful, unmoved and steadfast.

There is another quality. The rock has beauty. Its beauty is carved by the elements over time.

Her Majesty the Queen also occupies a special status in the Judeo-Christian story.

Interviewer: Why do you say that she is special and in what sense?

Sir Frank Kabui: I was surprised to learn during my term in office that she is a descendant of King David in the Bible. I stumbled on this fact during my research. I wanted to know who was this person whom I represented in Solomon Islands as Head of State. I was a stranger to her and she was to me. I wanted to know more. So I dug deeper for that reason.

Interviewer: So, what did you find?

Sir Frank Kabui. Part of the story is found in the Bible. It begins in the book of 2 Samuel where God promised King David that his throne will last forever until Jesus returns to this earth to sit on that throne. So, there is this connection between King David and the British Throne, represented by her Majesty. They are both of the tribe of Judah.

Interviewer: Then what next?

Sir Frank Kabui: Then the book of Jeremiah in the Bible picks up the story. King Zedekiah was the King of Judah. The King of Babylon completely destroyed the city of Jerusalem. The whole family of King Zedekiah was wiped out. At this point, it was believed that the royal line of King David had come to an end.

Interviewer: Then what next?

Sir Frank Kabui: Prophet Jeremiah then left Egypt and went to Spain. He and his group stayed in Gibraltar in Spain. His Secretary, Baruch, died and buried there. They again left Gibraltar for England and arrived in southern England. Then they went across to Ireland and settled there.

The surviving daughter of King Zedekiah was Princess Tephi. She got married in Ireland to a local Prince. The Irish royal family had connection with the royal family of Scotland and eventually in England.

Prophet Jeremiah was believed to have died and buried in Ireland to this day.

Interviewer: So, what is the point you are making?

Sir Frank Kabui: The stone of destiny brought by Prophet Jeremiah to Ireland was always placed beneath the coronation chair of all the royalties in Ireland, Scotland and England over the centuries during the coronation ceremonies.

The stone of destiny was the stone on which Jacob laid his head when asleep at Bethel and saw God in a dream. This is stated in the book of Genesis. The stone is always carried by the children of Israel wherever they went in those days. It is said that when Jeremiah reached Ireland, the settlers there had already been the descendants of a member of the 12 tribes of Israel.

It is also said that some Israelites were already in Spain when Jeremiah landed there.

The stone of destiny is said to be in Scotland today. The coronation chair remains in Westminster Abbey in London. The Royal Standard (the flag) of the Queen has the lion on it.  It is the symbol of the tribe of Judah.

Interviewer: Anything else you wish to say?

Sir Frank Kabui:  I thought it would be useful to know who our Head of State is and what are our feelings towards her as we celebrate her Platinum Jubilee. The Judeo-Christian connection is I think important to know as we are a Christian country.

The God of Abraham, Isaac and Jacob never fails in His promises. The Throne of King David remains alive through the British Throne.