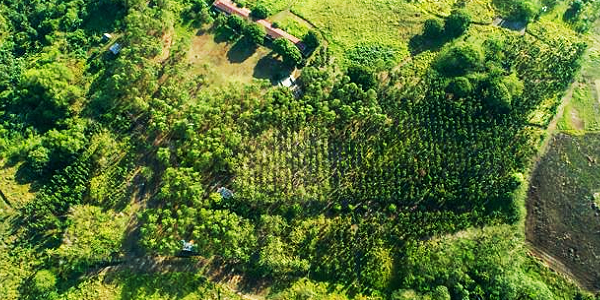 West Guadalcanal – If you asked the local children about the long line of trees growing next to the coastal road between Takamboru and Horabau on Guadalcanal Island, they might tell you that the trees have always been there. Many of the young people won’t remember that a decade ago, this part of the island looked different than it does today, and these trees are part of an environmental and economic transformation taking place in the region.

Almost all of Solomon Islands are naturally covered in rainforest, but not this part of Guadalcanal. Here, on the northwest corner of the island, is the only part of the island chain with a dry season. Known as Aruligo, Northwest Guadalcanal, this arid grassland is created by the rain shadow of Mt Popomanaseu. For two to five months each year, winds coming from the southeast are slowed by Popomanaseu, the highest mountain in Guadalcanal’s Kavo range, and in the Solomon Islands, greatly reducing rainfall in the region.

Eighty percent (80%) of the islands’ nearly 720,000 people live in rural areas and rely on subsistence or small-scale commercial agriculture and reduced precipitation can directly affect their livelihood.

But now, where hot winds once dried out sparse vegetation, there are over six hectares of forest offering shade, with trees up to 30 meters tall. Children can run through neat rows of mahogany, eucalyptus, melina, and other local species where only livestock used to forage in the hot sun.

These grants target projects that conserve the global environment while enhancing people’s well-being and livelihoods. The Isi Akson project was completed in December 2020 reporting that more that 6,000 trees now stand on what is called the Kolokisu Afforestation Camp.

Tree farming is a very effective conservation method and seen as one of the central solutions to the climate crisis.

Yoko Watanabe, the Global Manager of the GEF Small Grants Programme sees the Isi Akson project as a “great example of how civil society and community-based organizations can initiate local actions that provide nature-based solutions for global environmental issues, such as climate change and biodiversity loss, with the potential to generate powerful results that can be scaled up and replicated in other places.”

Innovative projects like this, “ensure that local communities – especially Indigenous Peoples, women, youth, and persons with disabilities – are positioned as key partners for sustainable development and stewards of nature,” says Yoko Watanabe.

The long-term benefits of the Isi Akson project are easy to see. Koria explains that during the past eight years, “not only have the trees grown, so has the knowledge base on how to farm them in the arid climate.” He also sees the learning design of the project as a good cultural fit.

According to Koria, “for us here in Solomon Islands, people are good at what we normally term as look and learn. Usually, it widens and increase people’s mindset rather than talking about it.” The next phase of the Isi Akson project is to create a Learning Centre for communities in the area and people of Solomon Islands, so they have access to the knowledge developed at the Centre.

Although Aruligo is unique in Solomon Islands, climate change is affecting the global frequency of extreme weather events. Changes in seasonal rainfall and temperatures have already contributed to droughts, which may cause other small island ecosystems to resemble the conditions on Aruligo, North West Guadalcanal.

Expertisee gained through the Isi Akson project could lessen the effects of climate change on subsistence food sources, livelihoods, and security.

Solomon Island University already recognizes the educational value of the project and includes a visit to the 5000-hectare forest as part of its forestry students’ official course work.

Once at Kolokisu Afforestation Camp, students need accommodation and other services. Over the next year, the project will create more employment opportunities for participating families and youth to meet these needs.

The income already generated by program participants has helped community members finance their children’s school fees and the project also engages women- important in a culture where men traditionally control most of the productive resources.