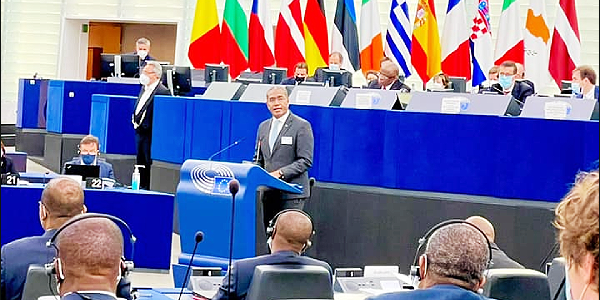 CHAIRMAN of the Parliamentary Foreign Relations Committee and MP for East Are’Are Hon. Peter Kenilorea Jr. is in Strasbourg, France this week to preside over his first face-to-face meetings in his capacity as the President of the Organization of the African, Caribbean and Pacific States (OACPS) and the Co-President of the ACP-EU Joint Parliamentary Assembly (JPA) that is currently underway.

The meetings begin on the 28th March and will end on 3rd April.

Since taking up his appointment in June 2021, Hon. Kenilorea Jr., presided over the meetings of the two parliamentary bodies virtually, due to COVID -19 restrictions.

President Hon. Kenilorea Jr. expressed, “It is good to finally meet in-person with other OACPS parliamentary colleagues. I look forward to leading the discussions that will put us in a good position on the future of the parliamentary institution under the new OACPS-EU Partnership Agreement.”

The meetings will be preceded by parliamentary committee meetings and special sessions for OACPS parliamentarians to discuss pertinent issues, including an update on the status of the new OACPS-EU partnership agreement.

President Hon. Kenilorea Jr. also presided over the OACPS Speakers of National Assemblies – Roundtable Discussion with the Secretary-General of the OACPSH.E Georges Rebelo Pinto Chikoti, who took the opportunity to commend the achievements of the OACPS Parliamentary Assembly and the active and dynamic participation of all members to meetings held virtually and across different time zones.

The Secretary General further commended the achievements of the OACPS Parliamentary Assembly with six Resolutions adopted, two Women’s Forum, two Youth Conferences, one meeting with Civil Society Organizations, and ten meeting sessions of the drafting committee on the Rules of Procedures of the JPA under the new agreement.

Of particular mention, was the parliamentary dialogue on COP26 that led to a Joint Declaration by the JPA Co-Presidents, which elevated the concerns of the JPA on climate change issues, to a wider international community.

President, Hon. Kenilorea Jr. acknowledged the opportunity to have exchanges with the Secretary General and the Honorable Speakers of the OACPS National Parliaments and assured the support of the OACPS Parliamentary Assembly as a vital institution under the auspice of the OACPS as an organization.