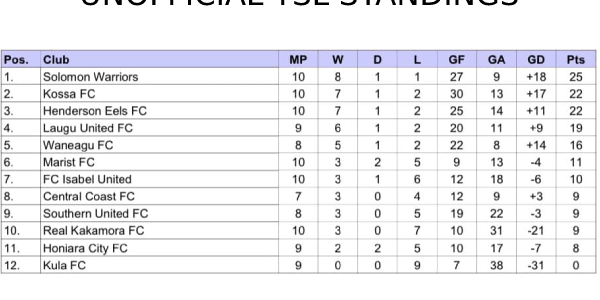 THE Telekom S-league (TSL) will kick off Match Day 22 and 23 at the Lawson Tama Stadium starting today.

Match Day 22 kicks off today with the first three matches.

Kula FC and Marist FC will kick off the day’s action at 12pm.

Kula is yet to register a point, having not done so in their past nine matches played.

They have come close to getting points in their recent match against Real Kakamora FC which they lost 3-2.

Marist is a well structured team and has proven to be tough contender.

Currently sitting on the sixth spot, Marist is not prepared to give away any matches and will make sure they are stay ahead of the bottom six teams.

The second match at 2pm is between defending champions, Central Coast FC and the unpredictable Southern United side.

After losing 1-0 to current leaders Solomon Warriors in the mid-week catch up clash, Coast is expected to come back stronger in today’s match.

Southern United is one place behind Coast, both with nine points.

Southern United equipped with mostly young players is the fastest team this season and have created a few upsets since the start of the season.

This is the main match for the day and most probably one of the must watch matches.

KOSSA sits on the second place with 22 points and Waneagu United on fifth place with 16 points.