US priority is solidarity with Pacific Islands 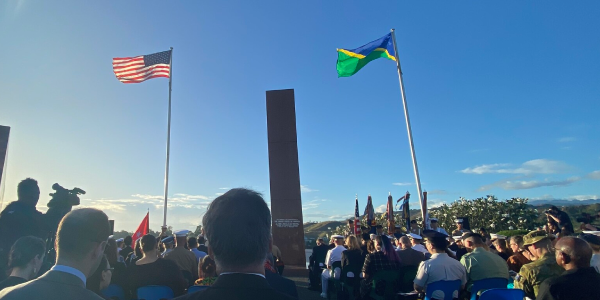 UNITED States President Joe Biden has made solidarity with the Pacific Islands a priority for his entire administration.

Speaking at the commemoration of the 80th anniversary of the Battle of Guadalcanal at Skyline Ridge today (Sunday 7th August 2022), Deputy Secretary of State Wendy Sherman said  this was why US Secretary of State Antony Blinken chose Fiji as the place where he released United States’ Indo-Pacific Strategy earlier this year.

“…because we see cooperation with the Pacific Islands as absolutely critical to the future of the entire region,” Deputy Secretary Sherman said.

Deputy Secretary Sherman is leading an interagency U.S. delegation to participate in the commemoration of the 80th anniversary of the Battle of Guadalcanal.

She said as US Vice President Kamala Harris told the Pacific Islands Forum last month, the United States is working to expand our diplomatic presence across the Pacific, including by opening embassies in Tonga, Kiribati and in Solomon Islands.

“We are committed to reinvesting in our relationships with our Pacific family as we work together to address the challenges of the next eight decades – and beyond,” Deputy Secretary Sherman said.