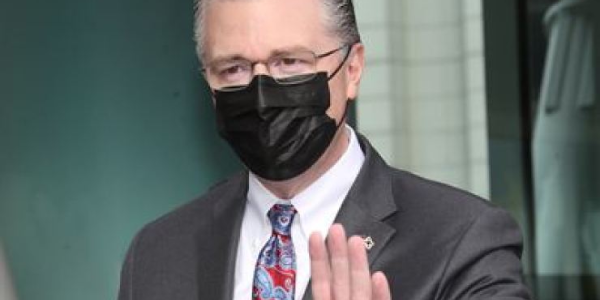 ….says it will retaliate if China sets up permanent military presence here

RETALIATORY action would be taken if a de facto permanent military presence were to be established in Solomon Islands, the United States warned Prime Minister Sogavare last Friday.

The warning emerged in the transcript of a news conference held in Washington DC two days ago.

Solomon Star yesterday received a copy of the 12-page transcript, which featured a question and answer session with Daniel Kritenbrink, Assistant Secretary, Bureau of East Asian and Pacific Affairs, at the U.S. Department of State after a lengthy introduction on the trip.

Prime Minister Sogavare who welcomed the delegation reportedly remarked, “thank you for visiting us after 80 years,” a remark that had probably set the tone for the 90-minute meeting,

“In the Solomon Islands, we met with Prime Minister Sogavare and approximately two dozen members of his cabinet and senior staff for a total of approximately 90 minutes.

“In the meeting, we reiterated our commitment to enhancing our partnership with the Solomon Islands, including expediting the opening of the U.S. embassy there, advancing cooperation on addressing unexploded ordnance, and increasing maritime domain awareness, as well as expanding cooperation on climate change, health, people-to-people ties, and other issues as well,” he told journalists.

He said Prime Minister Sogavare reiterated in his public remarks, noting specific assurances that there would be no military base, no long-term presence, and no power-projection capability.

“The United States emphasized that we would follow developments closely in consultation with regional partners.

“We also decided together with the Solomon Islands to launch a high-level strategic dialogue to enhance communication, address mutual concerns, and drive practical progress. We expect this dialogue will discuss in greater detail security issues of mutual concern, economic and social development, public health, and finance and debt.

“Look, I’m not going to speculate and I’m not in a position to talk about what the United States may or may not do in such a situation.  But again, our purpose in going to the Solomons was to explain to our friends there our approach to the region and the steps we’re taking to step up our engagement across the Pacific Islands, the specific programs and activities that are ongoing in the Solomons and that we expect to expand and accelerate in the months ahead, but also to communicate in a very candid way the concerns that we have about this security agreement that they have concluded with China.

“And again, we outlined that of course we have respect for the Solomon Islands’ sovereignty, but we also wanted to let them know that if steps were taken to establish a de facto permanent military presence, power-projection capabilities, or a military installation, then we would have significant concerns and we would very naturally respond to those concerns.

“So, again, I’m not going to speculate what that may or may not involve, but I think our goal was to be very clear in that regard.  And I think as we noted in my remarks a moment ago, and I’m sure you saw the statement that we released from the White House at the end of our trip, Prime Minister Sogavare did reiterate his specific assurances on each of those three concerns: that there would be no military base, no long-term presence, and no power-projection capability, something that he has said publicly.

“And again, we made clear we will follow those developments closely in consultation with our regional partners, and I’m confident when we hold our strategic dialogue session in September, we will have the opportunity to discuss further.” He said.

Ambassador Kritenbrink was also asked whether the security agreement with China “would be the first step for PRC to militarize the Pacific Islands like South China Sea.”

“I think, look, again, in discussing the security agreement that was concluded, we wanted to outline for our friends in the Solomons what our concerns are.  And again, Prime Minister Sogavare indicated that in the Solomon Islands’ view, the agreement they concluded has solely domestic applications.

“But we made clear that there are potential regional security implications of the agreement, not just for ourselves, but for allies and partners across the region.  And so that is what we wanted to make clear.  And I think it’s important in this context to keep in mind that we do know that the PRC is seeking to establish a more robust overseas logistics and basing infrastructure that would allow the PLA to project and sustain military power at greater distances.

“So, we wanted to have that candid conversation with our friends in the Solomons.  We outlined our concerns.  We have noted their assurances that they’ve stated to us and to others, and we’ve indicated that we’ll continue to monitor the situation closely and continue to engage with them going forward.

Ambassador Kritenbrink was also asked about what lessons have been ;learned from the Solomon Islands experience, there’s a perception that the United States simply hasn’t been as engaged as it could be, and if China is in fact seeking connections across the region that are deeper than they have been in the past.

What’s been learned from the Solomons and what is the United States going to do differently as this continues to come up?, s journalist asked.

“…  I would answer your question in this way.  I think each and every day, all of my colleagues here in the U.S. Government take steps to outline in a clear way, again, the tangible benefits to cooperating with the United States.

“We outline our affirmative, proactive agenda for the region, and I think, perhaps most importantly, we again outline the principles and the values that we hold near and dear.  But I think if you look at the range of engagement on the part of the United States across the Indo-Pacific and in the Pacific Islands, it encompasses everything from robust security cooperation to economic and trade ties, people-to-people ties, and really vitally important work on a range of global challenges as well – from COVID to climate change and illegal fishing and development assistance.

“I think our commitment to the region is strong and enduring, and I think the broad range of activities that I’ve outlined here tonight again demonstrate the tangible benefits of cooperating with the United States, and we’ll continue to focus on that going forward.

“…  In all of my travels across the region, whether it’s together with our senior officials, on my own trips, or this last one, there’s an incredibly strong demand signal in the region for greater U.S. engagement.  There’s a great deal of gratitude and excitement over the activities that we’re currently carrying out, and I think, again, there’s a strong demand signal to do even more, and we intend to respond to that, continue to respond to those demand signals in robust ways because we believe doing so is in the interest of the United States and the American people, and it’s in the shared interests of our many partners and the peoples across the region,” Ambassador Kritenbrink said.