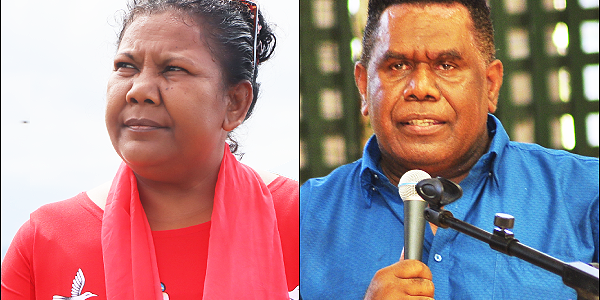 THE matter of Member of Parliament (MP) for North East Guadalcanal Constituency Ethel Vokia and her husband Jaimie Jamie Vokia and three others has been adjourned to March 28.

This is for the Public Solicitor’s Office (PSO) to confirm whether they will provide legal representation to four of the defendants including Jamie who sought legal assistance from PSO.

Ethel is being represented by Rano & Company.

Rano & Company had raised a legal issue as to whether the Magistrate’s Court has the jurisdiction to deal with offences under the Electoral Act 2018, given that all past electoral offences were dealt with at the High Court.

Having heard from Sheena Kilua who appeared for Rano & Company, Chief Magistrate Emma Garo directed Rano & Company to file an application on the legal issue raised for the court to determine whether or not the Magistrate’s Court has the jurisdiction to deal with electoral offences under the Electoral Act 2018.

The MP and her husband who is a former North East Guadalcanal MP are facing the charge of Election Bribery contrary to section 126(1)(a) and (b)(ii) of the Electoral Act 2018.

They were also jointly charged with three others, Rose Tala who is the Guadalcanal Provincial Assembly (MPA) and Moses Beacon and Polycarp Pereseni for the charge of Conspiracy to defeat justices and interference with witness, contrary to section 116(b) of the Penal Code 9 cap 26 to be read with section 21(a) of the Penal Code (Cap 26).

The court yesterday also imposed strict bail conditions to all the accused since their police bail expired yesterday.

The election bribery offence relates to an incident on 7 January 2018 at the National Referral Hospital (NRH).

It was alleged Ethel gave $250 to a person with the intention of influencing that person and two others to vote for her husband Jamie at the 2019 National General Election.

The second charge against all the defendants is in relation to an allegation in 2020.

Prosecution alleged that Jamie obstructed the due course of justice and Ethel and the three other defendants aided and abetted him between 20 January 2020 and 27 January 2020, in Honiara, preventing a woman who was lawfully bound to appear and give evidence as a witness from appearing and giving evidence at the High Court.

This was during a High Court hearing of the Election Petition case lodged against Jamie.

Vokia lost his seat after the High Court found him guilty of three grounds of briberies last at the Election Petition hearing in 2020.

A By-Election was then held later in 2020 which saw Vokia’s wife, Ethel winning the North East Guadalcanal seat.