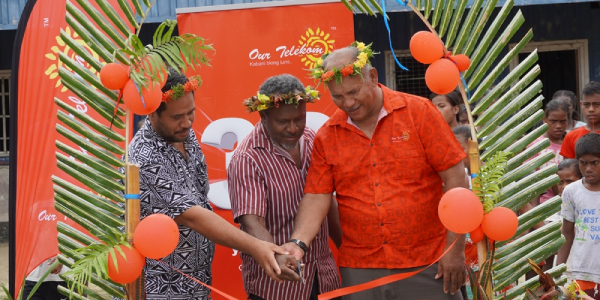 The once isolated island of Wagina in Choiseul Province is now connected to the outside world via the internet, thanks to Our Telekom following the successfully installation and commissioning of a new 3G tower this week.

This means the island with more than 4000 people are now enjoying the 3G coverage and are able to hook up with their families and friends around the country and abroad through the various online platforms such as Facebook and emails.

They also get to have real time news updates from the comfort of their homes or while out diving or looking after their seaweed farms at the nearby islands.

In the past, Wagina only had access to one 2G tower which only facilitates voice calls and text.

The 3G tower was constructed, completed, switched on and became operational last month.

After going through various technical tests, it was finally launched on Tuesday much to the excitement of the Micronesian community.

The latest upgrade is now transforming the lives of the villagers because they can access the internet at a touch of their fingertips.

To officially commission the new service, a colourful launching ceremony was successfully staged at Kuksin village.

The launching program saw hundreds of villagers from far and near, young and old, in and around Wagina converged the Kuksin primary school play ground to witness the grand occasion.

Despite a late start due to an early morning showers, Our Telekom took the centre stage with its red brand set up in a one off packed event that so many people together for a day of celebration, fun and entertainment.

The day’s program featured commenced with a number of speeches.

Our Telekom Board Chairman Baoro Koraua who is also from Wagina described the new service as a life-changing experience for his people.

He explained, for the past 59 years since he settled there his community had experienced so much difficulties in accessing better communication service.

From the radio wireless era, the community managed to get connected to a 2G network.

But with this latest upgrade, Mr Koraua expressed; “this is one milestone in the development for Wagina that has been provided by Our Telekom.”

As the chairman for Our Telekom for the past years, one thing he had noticed is the lack of an improved communication services for the community.

“So for two and half years, we have pushed and finally we get it done,” he said.

He recalled, it was a challenge to get the project completed last year due to slow response by the community plus the COVID-19 outbreak.

With the community now connected to the world-wide-web, there are many significant importance of this 3G service.

“You can get updates and news from around the world. You can get in touch with your loved ones who are currently working in New Zealand and Australia under the seasonal labour scheme. Thats why its important for us to get connected,” he said.

He also apologized for the late start of the program. “But the important thing is that, Our Telekom is here and we are here to celebrate. We hope to partner together and enjoy the service together.”

The hardworking chairman took the opportunity inform the community to take ownership of the infrastructure because the service will bring so much benefit to do business, education, health and electronic payments.

“To bring the service to the community at the first place is not possible, therefore, lets respect and look after the assets because it belongs to the community. This is an important part in our development,” he said.

The 3G coverage had also reached Kagau airport including Simbe Travelers Homestay which is also a bonus for the communities in North East Choiseul.

Speaking on behalf of Our Telekom Management in the absence of the Chief Executive Officer (CEO), Head of Commercial Francis Wa’ahero expressed gratitude to the community of Wagina for allowing Our Telekom to expand the service on the island through the upgraded network.

He highlighted that there are risks associated with the construction of such infrastructure because most times their technical teams and engineers have to sacrifice their time to travel, walk long distance and leave their families for months to undertake such projects.

Mr Wa’ahero added, as a company they are also concern with the welfare of their staff.

“However, these sacrifices are being taken because of the importance in providing communication services,” he said.

He also assured the community that Our Telekom is committed to ensuring they keep up with the changes in technology.

“We are committed to improving our technology services and the changes that comes with it. Therefore, be rest assured that we will upgrade our services in the future. In the past its 2G, now its 3G. Soon may be 4G or 5G and whatever technology that is available,” he said.

He also urged the customers to continue use Our Telekom services because it is a locally operated firm jointly owned by National Provident Fund and Investment Corporation of Solomon Islands (ICSI).

Wagina community representative Tata Teinamati in his remarks said, as a representative of the trustees who have offered the land where the 3G tower is established, he also thanked the Solomon Telekom Board, Management and Staff for the recognizing the need to improve communication services on Wagina.

“With this improved services access to online platforms like social media is now possible. We as the trustees would like to make certain that this relationship is maintained and would continue to flourish well into the future.

“Only in this way we can enjoy and experience the technological advancement through your services as public confidence towards your company can be guaranteed,” he said.

He also acknowledged Our Telekom staff for the work well done in the successful completion of the 3G tower at Wagina.

“Today we mark and witness success that has been achieved through understanding and cooperation between our communities and your company.”

Mr Teinamati who is also the chair of the Chief Council also assured Our Telekom that they will look after the infrastructure and have the stewardship approach toward the equipment of Our Telekom.

Mr Teinamati also expressed regret over an incident where a solar battery for the tower was removed and later returned.

“I wish to assure you that such incident would not happen again.”

The blessing of the tower was conducted by Fr Humberto Villa of the Catholic Church.

This was followed by the cutting of the ribbon by an outgoing provincial member of the ward, Mr Wa’ahero and chairman Koraua to officially declare and symbolize the opening of tower.

Head of Commercial Francis Wa’ahero then officially handed over the tower keys to Mr Teinamati as the rep of the Wagina community.

A segment involving the exchanges of gifts followed.

Wagina community represented a number of locally weaved bags to Our Telekom officials.

In response Our Telekom management reciprocated the gesture by presenting gift packs to guests, church leaders and community leaders who were present at the occasion.

To keep the customers’ excited and get the celebration mood going a number of activities were organized by the sales team.

These featured quizes, tug-o-wars for both females and males and dancing competition.

Winners were given prizes who walked away smiling with handsets, sim cards, umbrellas, mugs, t-shirts and caps.

It was the sales of mobile phones that got everyone excited as they swarmed the red tent where the sales team was stationed to buy new smart phones.

Since the pre-sales launch on Monday and on Tuesday hundreds of handsets were sold.

They took advantage of discount prices. Others buy more than one handsets.

Some families from eastern tip of the mainland Choiseul traveled to Wagina to join the launching and also bought new handsets.

Nixon Galonaki, a villager from the mainland of Choiseul bought four touch screen handsets. “I travel to witness the launching because this is the only opportunity. Traveling to Gizo and Taro is very far. So its good to have the team here today,” he said on Tuesday.

With the football world cup in Qatar set to kick off in November, many youths will definitely watch the matches live from their homes.

Meanwhile, theres plan to install a couple of new 3G towers at North East Choiseul near Kagau and at the eastern end of Wagina to ensure theres full coverage between the region.

The availability of 3G on the island became evident as pictures and videos from the island have flooded social media networks over the past days.

Head of Our Telekom Western Region Kalwin Aquillah has thanked all who have contributed to the success of Tuesday’s launching event.

He further acknowledged the great task that Wagina community has put. “This is so much appreciated. If not for them, the program will not be successful like what we experience during the event. We are so excited even though it was raining and our environment is not conducive to our program.

“Hence, we all still need to celebrate to the fullest we can because of the development of telecommunication that we have currently at Wagina,” he said.
He highlighted the benefit that this development bring to the community.

“It will help everyone in terms of health services, schools, churches and for most is businesses within our community, and throughout the Choiseul Province.
“Therefore, our part as a community is to look after our property because it’s so essential to help bring changes within our standard of living at Wagina,” he concluded.

Other members of Our Telekom that witnessed the launching ceremony included; Manager Sales Barbara Kere, Manager Marketing Sean Hiele and the sales team from Gizo and Taro.