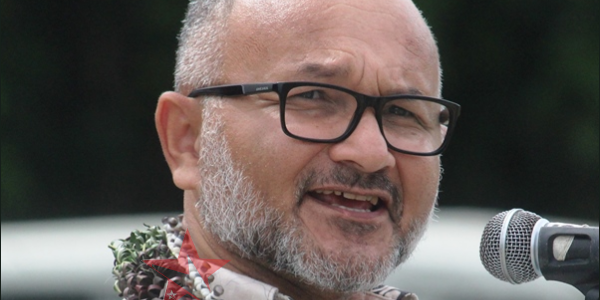 The ongoing political issues between the Malaita Provincial Government and National Government is the real reason why none of the Members of the National Parliament (MPs) and the Prime Minister Manasseh Sogavare did not attend the Malaita 39th second appointed day.

Guest of honor and Opposition Leader Mathew Wale uttered this during his keynote address to mark the Malaita second appointed day.

The Opposition Leader said the PM and MPs within the DCGA government are simply making excuses not to attend the Malaita day due to issues between the two governments.

PS Pirione said the minister is down with a sickness which the Opposition Leader replied in his speech by saying it is a mere excuse as he is also down with the current influenza but still made it to the occasion.

The Opposition Leader has voiced his frustration saying it is enough to treat Malaita this way.

The Opposition Leader said it is difficult to talk about national unity when leaders at the national level did not walk the talk on national unity which is obvious in their absence during the Malaita day celebrations yesterday.

The Opposition Leader said national unity in this country will never be achieved as long as leaders at the national level only talk about it without acting upon it.

He then takes time to comfort the gathering public that the absence of the national leaders should not trouble their minds as the people are the real government and not those that fail to make it at the celebrations.

With that, he suggests that it is time to vote out these self-serving leaders for failing to live up to the expectations of the people of Malaita.

The Opposition then thanked and congratulated the Malaita Provincial Premier Daniel Suidani for being a strong leader and standing up for the people of Malaita when their national leaders let them down.

The Opposition Leader then convey greetings from East Are’Are MP, West Are’Are MP, Small Malaita MP, and West Kwara’ae MP to the Malaita Provincial Government and the people of Malaita on the 39th second appointed day.