Waneagu move up on fourth 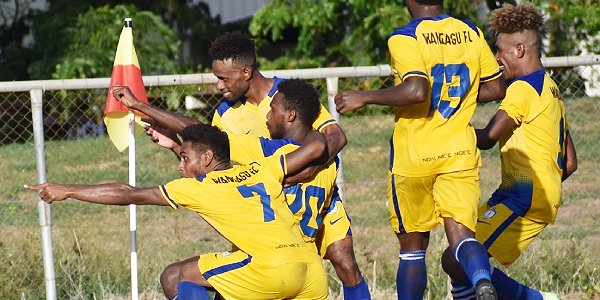 WANEAGU United FC moved up one spot to the fourth place with 19 points following their 1-0 win over KOSSA FC at the Lawson Tama Stadium, Saturday.

U19 player Francis Paul scored the lone winning goal in the second half to give Waneagu United their sixth win out of nine matches.

As anticipated, it was a tough match that had every supporter at the edge of their seats.

The first half was evenly contested with scoring opportunities and ball possession as both sides searched for a goal.

The goal did came in the second half when Francis Paul slot home a rebound from KOSSA’s goal keeper, who was attempting to stop a powerful ground ball sent from the edge of the box.

Despite the defeat KOSSA remains on the second spot with 22 points.

This is KOSSA’s final match for round one of the Telekom S-league (TSL) season while Waneagu still has two more matches to play.

Marist settles on sixth place with 14 points, Central Coast on the eighth spot with 12 points and three matches in hand and South United on the ninth spot with nine points and two matches left to play.

Kula FC is still struggling to register a point.