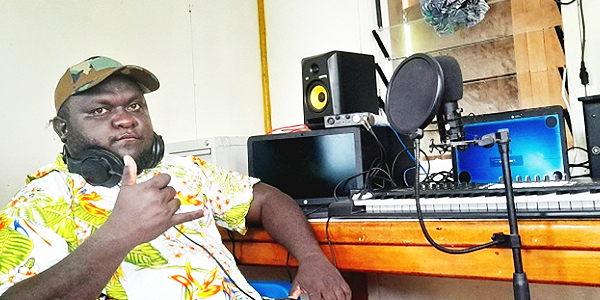 THERE are many talented local island musicians that have never been exposed or are still building their music career.

And it’s not that simple to emerge from a nutshell to gain fame from creating good music.

“Having a unique voice, a good studio set-up with quality sounds backed by a music producer who understands music, is all that local talented musicians want,” says one of the famous local artists in the Western Province.

T-Cage entered the music arena in the province 10 years back and is still making music and at the same time promotes local island artists.

His music style has influenced many other local artists across the country.

T-Cage blends his music with island reggae beats that became popular some years back and continues to be so.

Gizo is a home to T-Cage. That is where he lives since his childhood years.

T-Cage’s interest in music started in early youth, having listened to old popular artists like Litelife, Small Axe and DMP.

When the Gizo Mix Volume was released in 2010, many of the local island musicians were featured in some musical videos which produced as part of a promotion effort and T-Cage was one of them.

He immediately gained recognition and popularity then and after releasing many of his single songs.

T-Cage was also featured in his very own music videos produced by Nimox Production.

His fame grew and likewise his audience in Bougainville, Papua New Guinea, Vanuatu and other countries.

Despite years of growing success in his music career, T. Cage kept working hard to further excel in his music.

His hard-earned effort got him featured with some other popular artists like Evin Rush of Door Mans Project (DMP), Sean Rii of Dezine, Radikol TK, and other new local artists that rose to fame in the local music scene.

This was made possible with help from the famous music producer in the country, Baka Solomon.

Speaking to Solomon Star in an interview, T- Cage said it was Baka Solomon who supported him in his music career by giving him tips and advice that really helped him in his studio every day.

He said with the new setup, Baka Solomon also produced some of his songs as well as other local artists in Taro.

The first song produced by Wrec- Age Records is titled ‘’Custom Man” which became a hit song in the local airwaves since last month.

‘’This song was sung by Scardy boy who is also one of the new local artists from the islands,’’ he said.

T-Cage added that by having his own studio, he can now concentrate on his small music production.

“This studio really helps me a lot financially.  But above all, my main intention in this setup is to promote other local island artists around Taro.

“I also have my own music producer who resides with me and he goes by the name, Alison Kenga.

“At the moment, we are working on a few projects under Wrec-Age Records,” T-Cage said.

So far more than 10 artists have recorded their songs with Wrec-Age Records Studio.

Most of these artists are from Taro and around Choiseul.

With more local artists now recording their songs at the Wrec- Age Records, T-Cage is also preparing to produce a Taro Mix Music video that would be released sometimes in December.

When asked how he managed to set up the studio, he said, he earns money from artists who recorded their songs at his studio.

“For per single song, I usually charge around $500, but sometimes some artists only pay half because artists and singers find access to finances difficult very difficult.

“I respect that because all I want to do is to help our youths who financially struggle to build their music career,” he explained.

He further added, “that as an artist, there will always be criticism, some will talk negatively about some. But accepting criticism will make an artist grow.

“As for me, patience is golden. By keep doing good music and helping other artists to produce their music, I find a deep sense of joy and satisfaction.

“And of course, by keep doing what one loves and the style of one’s music and self-reflection one can excel,’’ T-Cage expressed.

The musician vows to continue to work hard on his own music as well as promote other local artists in the rural setting.