Was the gifting of this ambulance to blame? 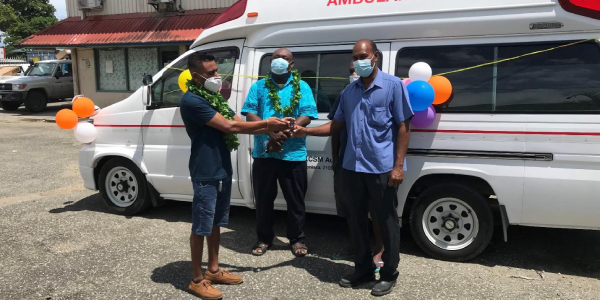 IT is said that business is a two-way street. Some though want to push it one way all along.

Being a two-way street business-minded person, Suresh decided to give something back to the community. And so on 25th February this year, it was decided that the ambulance truck (pictured) be given to the Guadalcanal Province.

Suresh is now debating whether the gifting of this life-saving machine has added to the eventual falling out between the once-lived-in couple. They have decided to go their separate way.

MA Lin Ping has since been throwing dirt on Suresh, the man who had given her 10 per cent shares in the holding company called LCSM Enterprises Ltd. The company also operates subsidiaries such as LCSM Automobile, LC Fitness Center and LCSM Entertainment. Suresh, a Sri Lankan national, owns the controlling share of 90 per cent.

In all  there were more than 14 armed PNG soldiers, about seven CID detectives and about four from the Tuita group, according to eye witnesses.

“I know they have orders to kill me. I also know it was Ma who directed the group to enter my private residence. The PNG troops, using rifles butts, smashed the door to my bedroom and ransacked my wardrobes. Some $243, 000 in cash was missing.

The raiding party did not have a warrant of arrest to conduct the raid. And for some reason they did not search the room next to his bedroom .That room was his office.

“For some reason the room next to my bedroom was not ransacked although the door was broken. That

Regardless of what everyone and anyone said about me, I have evidence, he said.