‘We have failed again’: Archbishop Dawea 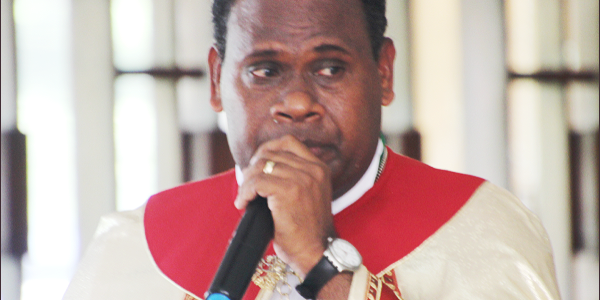 SOLOMON Islands has failed again as a Christian nation following the violence and destruction which happened in Honiara last week.

This was the message the Anglican Church of Melanesia (ACOM) Archbishop, the Most Reverend Leonard Dawea challenged its members with on Sunday as the church commemorated the first Sunday of Advent – a period in the Christian calendar leading to Christmas.

Members of the ACOM Council of Bishops were assigned to different parishes in Honiara with one message – to condemn all evil activities that happened on Wednesday, Thursday and Friday last week and to call for repentance and respect for all people.

Archbishop of the Church of Melanesia Leonard Dawea told the congregation at Saint Barnabas Cathedral yesterday that he could not believe how humanity in a so-called happy isles or Christian country has gone to such an extent.

“How Christians were able to put behind them the love of God and choose to walk in darkness.

“God who creates us all, regardless of (who) we are, hates to see his creation destroying each other.

“His heart bleeds for those who have been left homeless, who in the blinking of an eye lost everything they had,” Archbishop Dawea said.

He said what happened since Wednesday last week tested our true nature as Christians and Disciples of Christ.

“…unfortunately, we have failed yet again as a Christian nation, a happy isles.

“A lot of people, good Christian people found themselves caught in these unchristian actions and behaviours,” the Head of the Anglican Church in Solomon Islands said.

According to Archbishop Dawea, Advent is intended to focus on the relationship of two comings of Jesus: his first coming in humility, which is associated with Christmas and his second coming in glory as judge, pointing to the end of time.

As Christians, he said Advent is the period for repentance as we wait for the coming of Christ both through his nativity in humility and his second coming as judge.

Regrettably, the Archbishop said what transpires through the events of the last few days was hatred, greed, looting and stealing causing pain, rejection, loneliness, suffering and deaths.

He said these and others are concrete backgrounds for repentance as the church beings the season of Advent.

“If Christ comes back in this Second Advent, it is sure enough that many will not stand up and raise our heads to meet him as our salvation,” Archbishop Dawea said.

“Christianity is not spoken, it is a lived reality; not theoretical, it is practicality,” he said.

Therefore, he urged Christians not to be misled by the pleasures and excitements of this world.

“It is so sad that a lot of Christians became too occupied with greed and hatred and cannot resist the temptation to looting those who are already victims.

“We have not been good neighbours, we have all acted as the priest and Levite who walk by the man on the road.

“We have not been the Good Samaritan,” Archbishop Dawea said.

He said the unfortunate events last week indicated that to some Christians, God is a temporary entity for good days.

“People forget about him when opportunities to engage in evil present themselves.

“It is bad enough to say that people who were there looting are now in church on Sunday.

“It is bad if we continue to ditch God for opportunities like that, but if we ditch these activities for good and accept God now and forever, then blessed are you,” he said.

He then challenged the church to ditch all ungodly behaviours, not just of the rioting and looting but in all areas of life.

“The Advent of Christ should open our horizons to see and value people as they are regardless of colour, language, race, ethnicity, social standing, gender and religiosity.

“It is most clear that we are all God’s handmade, underneath the physical differences lies the red blood of commonality.

“It is what speaks to each other of our common value, not only as Christians, but as people, human beings,” Archbishop Dawea said.

He said now is the time to be neighbours to the victims of fire, rioting and looting.

“We can pray, but our prayers need to be accompanied by genuine actions,” the Archbishop said.