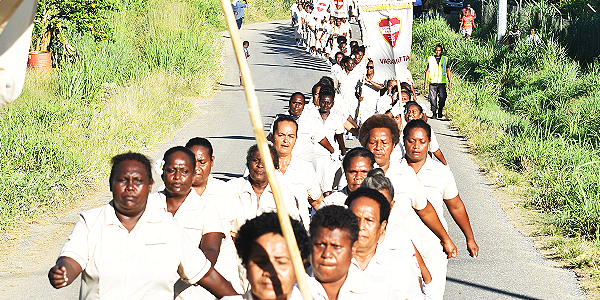 MEMBERS of the eight Dorcas Societies within the West Honiara District under the Seventh Day Adventist (SDA) within the Honiara region have successfully concluded their annual three-day federation program over the weekend.

The event which brought together more than 600 women members from the eight churches in the Western region of the city was held at the Betikama campsite, East Honiara over the weekend.It commenced on Friday and concluded yesterday.

The them for the event was: ‘I Will Go’.

Despite the initial slight showers on Friday evening, the program was blessed with clear skies on Sabbath (Saturday) and yesterday.

The program was described as a spiritually enriched program for the ladies because they were able to come together have fellowship with each through worship, pray sessions, Bible studies, singing, sharing of testimonies, visitation and presentation of reports highlighting challenges and achievements each society faced throughout the year.

As part of their visitation program, the dorcas ladies visited students of Betikama Adventist College (BAC) on Sabbath afternoon where they were able to have fellowship with the students and share things like soap and washing detergents with them.

With most of the students coming from various background and struggling families, the donated items were highly acknowledged by the students.

On Sabbath night, the program featured a night of fun through concert. This involved singing of songs and performing skits and drama which got everyone excited.

The highlight of the program was the official conclusion which featured an early morning parade yesterday from Burnscreek Adventist School playground all the way to the Betikama camp ground.

At the campsite, the officially closing ceremony was held.

The closing featured speeches and march past parade.

At the closing members of the dorcas were congratulated for their commitment towards the work of dorcas and community service.

Despite the many challenges faced by the women, but they were persistent and remained faithful in their commitment towards the work of community service.

The members were challenged to continue with their good work next year.

Pr Thao in his brief remarks on behalf of the church has acknowledged long serving members for their commitment who continue to support the community service work despite their age.

He said it shows maturity in their relationship with God.

He further highlighted the church wants to see the work of dorcas as a tool to evangelism to allow others to know about God.

Vaela Ngai Director of Women within the Ministry of Women, Youth, Children and Family Affairs also congratulated the women for their work to serve the community.

She said government recognises the work of womens group in the society because they are going a wonderful work to serve their communities.

She highlighted that women also continue to face challenges in our society and its important for all stakeholders to work together to address these issues.

Yesterday’s program concluded with a ‘secret friend’ program where members exchange gifts to conclude the event.

Next year a nation-wide congress for all dorcas members around the country will be staged at Betikama campsite in October and most of the members are already excited to be part of the event.