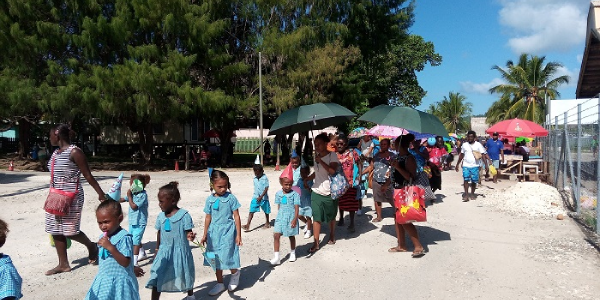 SHOWING love, support, being fair and listening to our children is very important for the future of each child.

These were the message highlighted yesterday at the celebration to mark the World International Children’s Day at the Western Provincial capital in Gizo.

The celebration brought together hundreds of young children from various schools in Gizo Island to commemorate the event in style.

The colorful celebration was held at the MSG building which commenced with a parade by the little ones in their colourful events.

The program featured most of the children especially students from Gizo primary and early childhood schools in Gizo Town who came to pack the venue.

The theme for this year’s celebration is ‘Equality and Inclusion for Every Child.’

“We should guide and love them with all our might,” Ms. Wong said.

She said children and young people are now raising their voices on the issues that matter to their generation and are calling for adults to have a better future.

“The aim for Children’s International Day is to promote togetherness and awareness among children to improve their welfare.

“The theme reflects every child belonging to any society, community or nationality is entitled to equal rights.” she said

She added it also emphasizes on the education of discrimination among children of various background, religion, race, capability, colors and you can name it.

“Another vital perspective of the theme is to take step forward by making a peaceful world that would be more inclusive for our children,” Ms. Wong added.

Ms Pitakanji said every child belonging to any society, community or nationality is entitled to equal rights.

She added, there are many societies where adult children and young people are struggling with equal rights and equity for adolescents.

“Our objective of integration therefore must be aimed at encouraging their narrative and bringing all our children under one flag of an inclusive world,” she added.

This includes reciting of poems, singing, dancing and other children’s activities.

Early Childhood schools from Gizo Town, Nusabaruku, Babanga and surrounding towns and the public have participated in the celebration.

World Children’s Day is celebrated around the globe in different countries in the past weeks but according to the United Nation it falls November 20th each year.

That day was marked when the UN General Assembly adopted the declaration of the right s of the child.