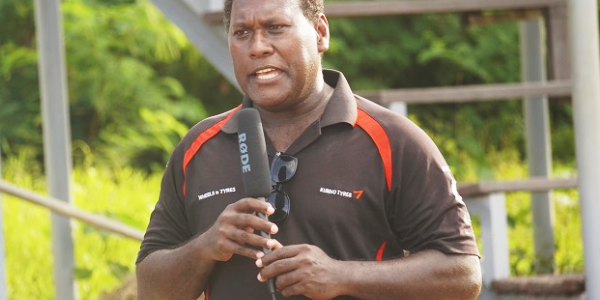 THE Western Football Association (WFA) has thanked the Solomon Islands Football Federation (SIFF) and Solomon Power for the handing over of the Just Play Equipment in Gizo, Western Province.

The handing over ceremony was held at the JFK Stadium on Thursday.

WFA Vice President, Adrian Masa said, they are so happy and pleased with these important equipment that will have greater impact on the kids in the growth and development of football in the province.

He said, this is the first of its kind in football for the province to receive in sports for the advancement of football.

He said it so common that development and sponsorship happens only in the competition now it is at the preparation stage.

“With that I would like to thank and appreciate the Solomon Power for the sponsorship and acknowledge the SIIF and the president the team to come up with the program.

“It is the brain child for SIFF which called ‘’UMI PLEI’’ and they believe is that if we start of children, the development in football in the near future to come.

“It might be not a something that we will see it tomorrow by it will take time but the impact we believe that it will be a positive outcome in development for western province and it will be so helpful,” he said.

He added, this will be a first time for the equipment to be established in every rural areas including Marovo to Shortland.

On Thursday only two centers have received already their equipment because the chartered ship cannot load most of the equipment.

“Other centers in Western Province are yet to receive their equipment and WFA under Technical Committee will decide for the distribution to other islands within the province.”

However, every other center in the rural areas will receive their equipment sometimes this week, he assured.

Meanwhile, Umi Plei Gizo will soon kick off their new season as registration for kids is underway.