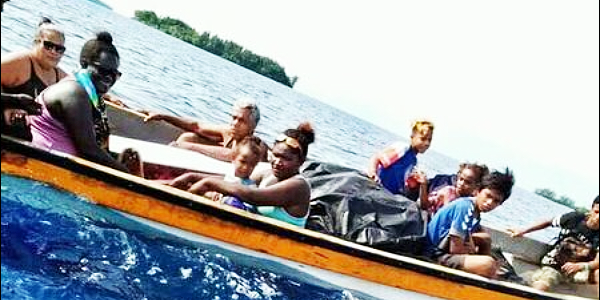 THIRTEEN of the 14 family members that went missing at sea are still missing between Vella La Vella, Shortlands, and Choiseul waters and a lone female body was found.

The female body was spotted at Zinoa Island Northwest Choiseul on Tuesday this week, three days after the sea tragedy, and was transported to Taro by a Police Search Team and a Medical Team.

It was believed that the 13 missing adults and children were all deceased, drifting or may be consumed by wild sea creatures.

Onboard the boat that went missing are 14 people, most of them are children. They first boarded a double 40 hose-powered (hp) engine and ray boat but later made a shift into the 75-hp boat.

This was due to a mechanical problem that affected the double 40-hp so they jump inside the 75 hp.

The 75-hp went ahead to the destination, Shortland Islands but unfortunately the trip ended in a tragic sea ordeal.

The surviving boat- the 80 hp (Double 40) carries 15 people and they managed to survive after drifting for a night in the middle of the sea.

They were lucky to make it to the shores, after spotting lights from Choiseul.

In the early hours of Sunday, they were washed ashore to Moli Island near Taro and managed to call Taro Police for help and that was when the search for the missing boat begun.

On Thursday, the dead body of the female arrived in Gizo. Many of the immediate family, close family, relatives and friends paid visitation at their area, called Sawmill.

Condolence messages had been conveyed to close families and relatives of the deceased and were shared on Social media, Facebook.

Solomon Star Gizo understands that the dead body will be returned to Vella La Vella, the village of the deceased.

Meanwhile, the Taro Police Search Team and the Gizo Police Response Team are still continuing with the search mission.

It was believed that MV Shortland also assisted the police in the search plus some other individuals on their boats, in trying to locate the 13 missing people.