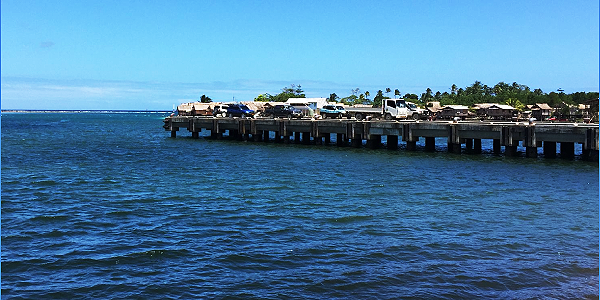 A QUICK response from Auki police on Thursday afternoon saved three Malaita ex-militants from an angry group at the Auki wharf, Malaita Province.

Those three ex-militants were on their way to Auki via MV Pelican Express when a group armed with traditional weapons approached them and marched them through Auki town to an unknown location for questioning.

Solomon Star Auki was informed that the group were angry about the involvement of the three Ex-militants in the recent motion of no confidence against Premier Daniel Suidani, in October last year.

The group intercepted the trio at Auki Wharf and marched them towards Kwaibala when police quickly intervened and brought the situation under control.

A spokesperson for the group said their intention was not to harm the trio, but to question them over why they provide security for Malaita Members of Parliament (MPs) within the DCGA government and MPAs who went against the MARA government and its wishes.

According to Auki police Operational Commander, Inspector Michael Ramosaea, the situation was fuelled by misunderstanding.

Inspector Ramosaea said if it was not for a police quick response, people could take law into their own hands.

He said later on during the day, both parties met at Auki Police station where the trio explained that they were following the East Malaita MP Manasseh Maelanga.

It was believed that the Deputy Prime Minister was travelling on a Constituency visit to East Malaita.

The trio explained that they are working for the Deputy Prime Minister and are not in Malaita to cause trouble as suspected by the group who halted them at the Auki wharf.

Malaita for Democracy Development (M4DD), President Knoxly Atu was also called to calm the situation down where an understanding was reached.

The parties then came together and shook hands in the presence of police as a sign of peace.

According to Police, the trio left for East Malaita to accompany the Deputy Prime Minister who is currently in his electorate for a New Year visit.

Information gathered claimed that the trio are part of Malaita ex-militants who provided security and accompanied the mover of the motion against Premier Suidani on their trip to Auki on 26 October.

It is further stated that the trio were spotted among bodyguards who escaped from Hotel Malaita on October 27 2021, when the Malaita public turned against them.