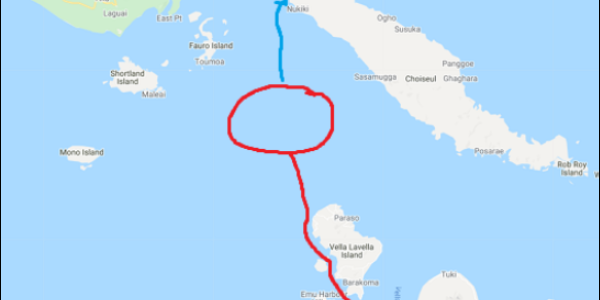 HEALTH officers in Choiseul Province have identified the remains of a human corpse found on Sunday in the sea near Taro Island to be that of a young child.

Speaking to Solomon Star Gizo from Choiseul Province, an eye witness Junior Vora said around 10am on Sunday their family travelled Supizae in a 40horse power engine to attend church service at Taro Station.

Junior said as they were travelling they saw birds flying over something in the sea between Taro Station and Supizae.

He said they did not take much notice to it but when they arrived at Taro Station for the service, news had spread that another body of those missing had been found.

He said it was another canoe that was also travelling to Taro Station for the church service that went up close to the pack of birds to find part of a human body.

“The remains found were already white and decomposed,” Junior said.

He said they reported the discovery to Taro Police who later picked up the remains and transported it to Taro Station for health officers to examine.

Health officers, who viewed the body, after a thorough investigation said the remains were of a young child.

The remains are being kept at Taro Station for further investigation by police.

Sunday’s discovery is believed to be the remains of one of those who went missing during New Year’s Day.

The 14 who went missing initially travelled on the boat with the double 40 horse powered engines but shift to the 75 horse powered boat when their boat had mechanical problem. They went ahead of the other boat but never arrived at their destination.

The surviving boat (the one with the double 40 horse powered engines) drifted for a night in the middle of the sea and were washed ashore to Moli Island near Taro and managed to call Taro Police for help.

A search for the missing 14 was called off on Friday last week.

A body of a female was found at Ninoa Island, Northwest Choiseul on Tuesday last week and Sunday’s discovery was believed to be the remains of one of those still missing.

Meanwhile, Prime Minister Manasseh Sogavare last week conveyed his sincere condolence to the family and relatives of the woman whose body was recovered as the country awaits the outcome of the search for 13 others still missing between Gizo and Shortlands.

“I pray for God’s comfort to the family. I also pray that we will find the others to know what had happened,” said the Prime Minister said in a statement recently.

Prime Minister Sogavare pray that our Almighty God help our search parties in their mission to locate the missing people and may God be with the people that we are still looking for.