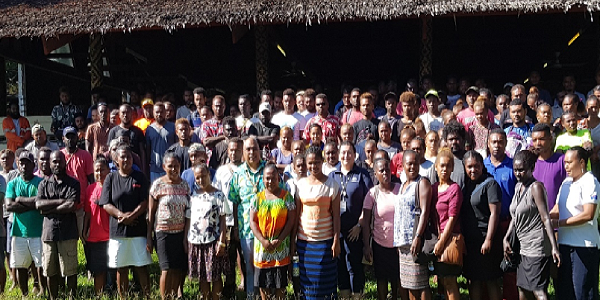 THE Government of Australia will soon allow long engagement Pacific Island workers under the Pacific Labour Mobility Scheme to take their families with them.

Speaking to the media today (9th August 2022) visiting Australia’s Minister for International Development and the Pacific Minister for Defence Industry Honourable Pat Conroy said this is one of a number of measures Australia is taking to improve the scheme.

“…we made a number of announcements to improve the scheme. First is to allow Pacific Island workers to bring their families, which is particularly important for the longer engagements.

“Obviously, the seasonal worker doesn’t really make as much sense. But if a Pacific Islander is in Australia for three to four years, they should be able to bring their family. So that’s one important improvement,” Mr Conroy said.

He said Australia will also be making the scheme more attractive for Australia employers to access the scheme by reducing the cost imposts around the airfares.

“So we’re cracking down on exploitation and implementing all recommendations for the migrant worker taskforce,” he said.

Some 4,000 Solomon Islands workers are working under the scheme in Australia today to fill the country’s urgent skills shortages.

Mr Conroy, who described the Pacific Australia Labour Mobility Scheme as a “triple win” added that the Australian Government is also looking at expanding the scheme into other areas of hospitality and aged care.

“…we’re looking at how we can expand the scheme into other areas, so not just traditional areas like agriculture, but into areas that are more female dominated like hospitality.

“I visited the APTC training centre in Suva in Fiji last month, where 40 trainees were being trained in Cert III qualifications for aged care, and they were going across to Queensland. We’ve got a very significant agedcare worker shortage; in fact, it’s at the heart of the crisis in aged care, so having Pacific Islanders come over, earn significant amounts of income for them and their family, and provide care to senior Australians is a winwin.

“So, they’re some of the significant improvements we’re looking at in that scheme,” Mr Conroy said.

The Australian Minister is leading the Australian delegation currently visiting Solomon Islands to commemorate the 80th anniversary of the Battle of Guadalcanal during the Second World War.

Mr Conroy said the Pacific Australia Labour Mobility Scheme is a triple win because it’s a win for Australia where it get people to fill their temporary skills shortages in rural and regional Australia, a win for the workers involved who returned to their countries with great skills and experience and a win for the countries Australia partner with.