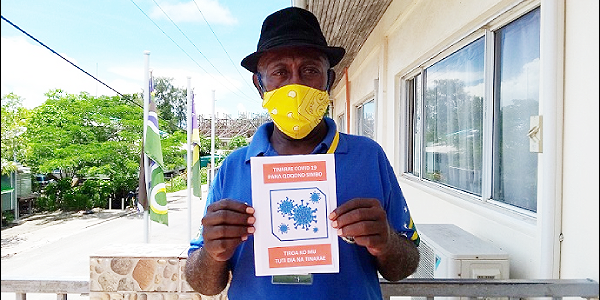 A SENIOR government administrator in Western Province is taking the initiative to translate all COVID-19 messages into his native Simbo dialect to enable his people to better understand the safety messages.

Gideon Tuke, who is also a Simbo Island elder, told Solomon Star Gizo that with the current health crisis it is important health messages and protocols are understood by rural dwellers as well.

“Understanding relevant medical terms is vital at all times during this global health crises where compliance to containment measures is critical in order to protect individuals and the community at large,” Mr Tuke said.

He said he came up with the initiative to translate all health safety measures and protocols from English to Simbo language in pamphlets after observing the difficulty villagers faced in understanding and practicing the safety measures.

The pamphlets were launched and distributed to communities in Ward 3 since Monday this week.

“Many times there are COVID-19 awareness and safety measures being aired through radio which are done in English and the same goes to daily newspapers and the social media, but not everyone in the villages digest the information effectively,” Mr Tuke said.

However, the senior administrator said the COVID-19 safety measures such as wearing of masks, social distancing, washing of hands, using hand sanitizer and other public health safety measures are in the pamphlet and written in their local language.

Since the distribution of his pamphlets, Mr Tuke said the people of Simbo Ward 3 now have a better understanding of what COVID-19 really is and the health safety measures.

“…people of Simbo in Ward 3 have clearer knowledge and insights of some new health safety measures that they never seen it before,” he said.

Therefore, he urged the government to do the same for other areas in which COVID-19 community transmission is happening.

“These are just few small words and do not cost government a lot either,” Mr Tuke said.
“This will really help our people in the villages to understand and grasp sufficient knowledge regarding the important health safety measures of COVID and any other sickness,” he added.

He said about 80 per cent of the country’s population live in rural areas and most of them do not have access to radio, newspapers or social media.Mr Tuke said the Government through the National Oversight Committee need to provide a budget for such initiative to be rolled out in other provinces to benefit communities.

“In my personal view I think there is no funding from the government to produce this kind of initiative, if so they should support it.

“This is because the virus is here to stay and if there is another second or third wave, these safety measures will still remain in the pamphlet and can be used again,” he added.

Following the distribution of the COVID-19 local language pamphlets to all the communities and household in Simbo Ward 3, many leaders and villagers have also acknowledged and thanked the Senior Government Officer for his tremendous job.

The Ward 3 villages include Tapurai, Navoro, Nusa Simbo, Riguru and other small villages.

All the pamphlets were shared to each family and household in these villages.

Around 2000 plus pamphlets have been distributed to the communities in Ward 3 so far.