For the love of Spanish music 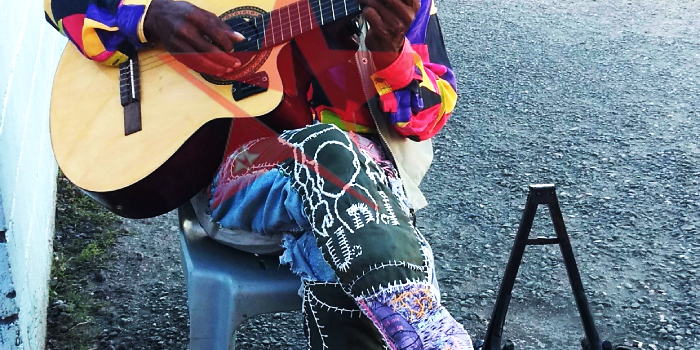 The country’s very own and old time Classic and Spanish music performer Robert Foreman recently shared his love for classical music and Spanish traditional styles such as flamenco.

The Solomon Star met up with Mr Foreman when he was performing his classical and Spanish style of music at National Provident Fund (NPF) Plaza, besides the Bulk Shop, Point Cruz, Friday.

The seventy one 71 years old Foreman said he started playing classical music and Spanish music since twelve years of age in the 1970s.
Mr Foreman said in 2000 after he was performing for a guy that approached him at Vanita Restaurant, Tulagi, Central Province.

A Spanish woman approached him and told him that he performed well with his style of classical and Spanish music.

“I perform Brian Adam’s music, ‘Have you ever loved a woman’ that time, and was approached by a Spanish woman and she told me, Mr Robert you have done well! But you can do more than that if get coaching from professionals,” Foreman said.

He then told the Spanish lady that there is no one in the country that could teach him.

From hearing that; the Spanish lady led Robert to her yacht that was anchored at the Tulagi wharf during the time.

“She led me to her yacht and I waited outside while she went inside and bring with her a guitar and a little box.

“She then performed a classical tune for me and I was dumbstruck by her performance. I just cannot believe what I have heard and asked her to teach me,” Foreman said.

However, he said the lady opened the little box beside her and inside the box was a ring.

“With this ring on your finger, you must respect your clients, audience, women, young girls and children.

“Respect all these people and through that the classical and Spanish music style of performance will naturally come to you,” the Spanish lady told Foreman.

She added once he adopts the style of music the ring will disappear by itself from him.

From there Foreman continued playing classical and Spanish music.

And in the 2004 he went to Fiji and worked at the International Resort at the main island of Viti Levu for one and half year.

He came back to the country before the April riot in 2006 and worked at the Pacific Casino Hotel.

“I performed at the Pacific Casino Hotel first Captains Bar during that time. Then one night after one of my performances, when I woke-up in the morning the ring was gone from my finger. From there I remembered what the Spanish lady had told me,” Foreman claimed.

However, he said after the 2006 April Riot in Honiara, and when Pacific Casino was looted and burned down, he and those who worked and even performed there lost their jobs.

“I then performed at King Solomon Hotel. But other hotels in Honiara have invited me to perform for their European guests,” Foreman said.

He added also performed during the visit of Prince William and Kate at the Honiara Hotel.

Foreman said he performs four hours per night at the hotels and earned good money.

But he said due to the Covid-19 that affects the country and the globe since last year has affected his performance at the hotels.

“I am struggling with where to perform since the outbreak of the virus. Because at the end of the day, through my performances, I earned money and meet my daily needs. Therefore no visitors coming into the country have affected me a lot,” Foreman said.

He added because of that he wrote a letter to the Management of the National Provident Fund (NPF), and thanked to the General Manager, Michael Wate and Property Manager Noel Orudiana he was given the privilege to perform at Point Cruz, beside Bulk Shop every Wednesdays and Fridays.

It is understood, Spanish music is often associated with traditional styles such as flamenco and classical guitar.

While classical music can have many forms, including the symphony concerto, oratorio, opera, sonata, fugue and any combination of dance movements such as suites.