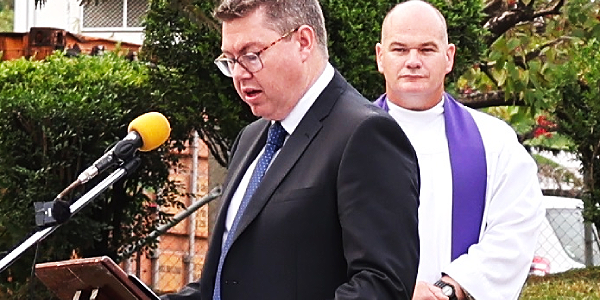 OFFICIALS from the Solomon Islands, Australia, New Zealand, and Japan have congregated at the Rove Memorial Park on Tuesday to commemorate the HMAS Canberra Service.

It was a memorial service to remember those who lost their lives while boarding HMAS Canberra during the battle of Savo.

The WWII ended 80 years ago but their service and courage to fight and bring peace and unity to the Pacific Ocean and the World still remembered through yearly commemoration.

Since the COVID-19 was declared by World Health Organisation none of the WWII commemoration in the Solomon Islands was made.

Even in Solomon Islands, locals have been ordered by the Government to leave for their provinces.

Australia Ambassador to Solomon Islands, Dr Lachlan Strahan said we can be able to remember the fallen soldiers of HMAS Canberra today (yesterday) because Solomon Islands Government have reopened the border on 1st July 2022.

“As the border of SI was opened on 1st July dozens of military personnel, dignitaries and top officials of Australia, U.S., New Zealand and Japan able to come and celebrate the Battle of the Guadalcanal that happened 80 years ago, “ he said.

There were several speeches from government dignitaries during the memorial service.

After the speeches governments officials, military and police ranks and files and military generals able to lay their wreath in remembrance of those who died in the HMAS Canberra and those who died during the war on both side of Imperial Japan and US allied Forces.

Canberra was launched by Her Royal Highness Princess Mary on 31 May 1925.

It met her fate on 9 August 1942, on the same date and year it was decommissioned because it was mission in action during the start of the war.

John Brown & Co Ltd, Clyden was the builder. The ship was built in Scotland.

HMAS Canberra was an Australian Heavy Cruiser vessel with displacement of 9850 tons, 630 feet in length and its beam was 68 feet 4 inches with a speed of 31 1/2 knots.

Adding to its pride, it has accumulated number of awards:

In the darkest of the early hours of the morning of 9 August 1942 the RAN Heavy Cruiser HMAS Canberra was severely damaged off Guadalcanal in a surprise attack by a powerful Japanese naval force in an action that became know as the Battle of Savo Island.

Canberra was hit 24 times in less than two minutes and 84 of her crew were killed, including Captain Frank Getting.

Following an order to abandon ship the Canberra was sunk the next day by a torpedo from US destroyer.

At the time of the action the Canberra had formed part of a US Navy-RAN force screening American transports during the landing operations of US marines at Guadalcanal, which begun on 7th August 1942.

A failure of Allied intelligence and vigilance resulted in this screening force being surprised by a determined group of seven Japanese cruisers and a destroyer near Savo Island just before 2am on the morning of 9 August 1942.

The Canberra, as the lead ship of the screening force, was the first to be attacked and received the full force of the Japanese barrage.

In the darkness and confusion the rampaging Japanese attackers wreaked havoc with Allied vessels before withdrawing.

However, despite this significant setback landing operations at Guadalcanal continued.