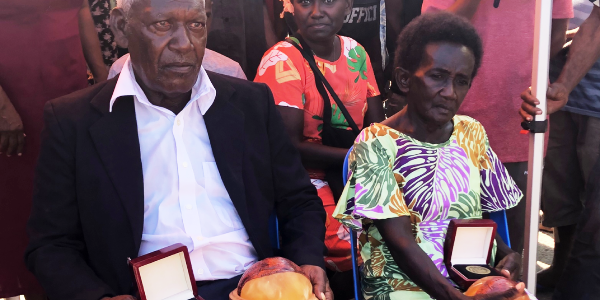 The relatives were representing their war veterans’ father and grandfather who have fought alongside the U.S and the allied forces’ during the war in Solomon Islands.

Pascal Belamatanga told Solomon Star in an interview that he was so excited to receive the medallion of his grandfather Cpl Mathew Belamatanga.

He said he has written and will soon publish the book of his grandfather when he fought the WWII with the allied force.

During the war he was recruited to assist US Marines on a US landing craft transporting food and ammunition to soldier East and West of Guadalcanal.

Like all scouts they endure fear, but were very brave.

Another important person who was interviewed by Solomon Star was Nelma Ane Biuku, the daughter of Biuku Gasa.

Nelma said she was very excited to receive the medallion from no other but the daughter of late John F Kennedy-Caroline Kennedy.

“Caroline Kennedy was like a sister to me because my father rescued his father and they have a united relationship during and after the war,” she said.

She added, it’s a privilege to meet Caroline in person and on top of that, she awarded her the medallion in recognition of the work done by her father.

Caroline is the ambassador of U.S to Australia.

According to WWII history, Aaron Kumana and Biuku Kasa (father of Nelma) were two local scouts in Western province who rescue J.F Kennedy.

History revealed, during WWII, August 2nd Kumana  and Gasa were tasked with patrolling the waters near Gizo by Australian Coastwatcher Sub Lieutenant Reg Evan, who manned a secret observation post at the top of Kolobangara island’s mountain Veve volcano after spotting explosion.

Dispatched in their dug-out canoe for possible PT 109 survivors, Kumana and Gasa paddled until they met Lt John F Kennedy of the United States, and the rest of PT-109 crew following the ship’s collision with the Japanese destroyer Amagiri near Plum Pudding Island on August 2, 1943.

They risked their lives on hostile waters patrolled by the Japanese to ensure a successful rescue operation on 7th August.

Other veteran local scouts have their own stories which resulted in their receiving of medallions during the celebration of the 80th Anniversary of the battle of the Guadalcanal.

Most of them have shown excitement in their facial appearances to receive medallions on behalf of their fathers, grandfathers and uncles.