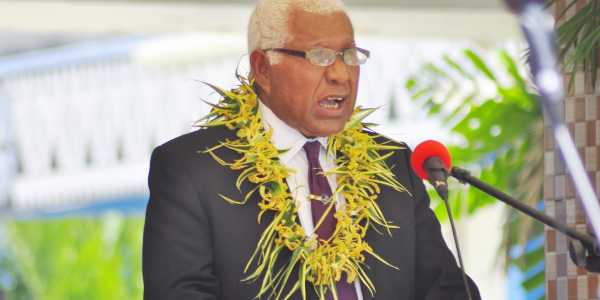 The school since Friday was in celebration mode featuring series of activities being organized where both former and current students participated on.

On Friday the highlights was special appearance of senior ex-scholars who shared their experiences in the school.

The celebration continued on Saturday with colourful float parade from Commonwealth Street to the school. Adding more excitement to the celebration was the cultural performances from divisional classes from 1952-2022.

Each class put on their items which brought laughter’s and made the celebration a memorable one.

Those attended were filled with joy as they reflect back to their education journey at one of the prestigious school.

Yesterday the celebration concluded with thanksgiving prayer for 70 years of the school.

The thanksgiving service was graced by Guest of Honour the Governor General Sir David Vunagi.

He is not only attending the celebration as guest of honour but also attend as former student of the school.

Speaking at the close of the celebration Sir David Vunagi said for the past 70 years a lot has been done as witnessed today.

“My prayers of thanksgiving and joyful hope that those coming after us, will continue to do good work in God’s mission at KG VI School and unto God be the glory forever Amen.

Sir Vunagi was the KG VI Alumni and also the former biology teacher at the school.

Sir Vunagi said he was honoured to be invited to attend the KG VI 70th Platinum Anniversary and for that he thanked the local organising committee for inviting him and his wife to be part of the significant event.

“Invited guest ladies and gentlemen I think it is wrong to think of platinum celebration like this one as time as we look back in history, there are also time we look forward to the next 70 Years and so it is really what we do next year or this year or next year or in the subsequent years that will be the stories for the next 70 years of the school,” he said.

He said platinum jubilees are rare occasions, they don’t happen often and so it’s an honour for everyone to be able to come together to thank God for what this school has been to this nation during the last 70 years.

“Thank you organizing committee for inviting us to come back, otherwise we will be lost on the way,” he said.

Sir Vunagi reflected back that during the first two years of his marriage to his beloved wife they lived at KG VI and taught at KG VI.

He was then a biology teacher.

He said they left the school at the end of 1980 to take up another government scholarship.

And yesterday was the first time in 42 years that he and his wife were invited to go back to KG VI to celebrate with the current students and other alumni at KG VI.

KG VI School has been regarded as Prestigious School in Solomon Islands and the South Pacific as well.

As a prestigious and cream school in the nation, KG VI has produced five Prime Ministers for the country.

The KG VI School not only produced prime ministers of this country but also four Governor Generals.

KG VI also produced one Chief of Justice of Solomon Islands and he is Sir Albert Rocky Palmer (2014 to date).

KG VI not only produced prime ministers and governor generals of this country but also CEOs, PSs, doctors, lawyers, teachers, sailors, pilots, pastors, sports men and women and the list goes on.