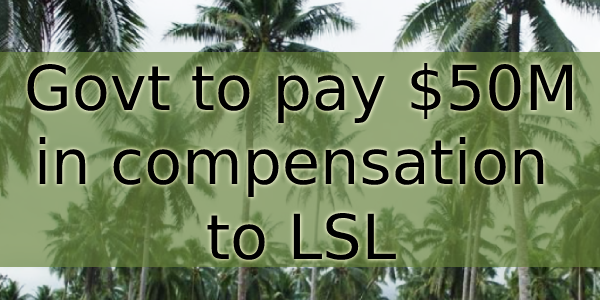 THE Government has suffered a major blow in its fight to suspend an enforcement order to pay Levers Solomon Ltd (LSL) $50 million in compensation for the use of its land at Alligator Creek in east Honiara.

Instead, Judge Foukona ordered the government to pay what is owed Levers Solomon Ltd by 4:30pm on 13th September 2022. Details of the payment in terms of the actual figures are being finalized and are expected to be released this morning.

In Court on Tuesday, Judge Foukona showed little emotion, if at all. His body language, though showed disappointment. He asked why the government had repeatedly evaded making the payment in compliance with repeated High Court Orders without giving any valid reason.

Tuesday’s ruling is expected to bring an end to the long running battle in this case.

On June 15th this year, the Permanent Secretary of the Ministry of Finance and Treasury McKinnie Dentana appeared in the High Court to explain why the government kept ignoring High Court Orders on this matter for the past four and a half years.

The payment relates to the use of land jointly owned by Levers Solomon Ltd (LSL) and RIPEL at Bloody Ridge east of Honiara. Despite High Court Enforcement Orders, the government has avoided paying the debt to this day.

Yesterday’s ruling could open the floodgates on similar outstanding claims ordered by the High Court against the government.

The High Court later freed Dr. Aipia on appeal and ordered a $56 million compensation against the State for wrongful imprisonment and loss of business.

In a move seen as one of delaying tactics, Attorney General John Muria jnr is appealing the Dr. Aipia decision on the grounds the award was excessive.