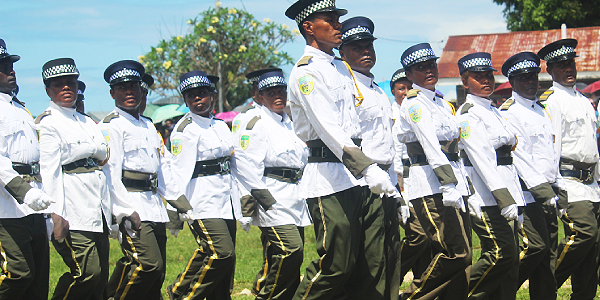 The people of Malaita Province successfully marked the Malaita 39th second appointed day at the APS field in the provincial capital of Auki on Monday.

Hundreds of Malaitans turn up to mark the day under the theme, “resolute in unity, building a better future”.

The event started at 6:00am in the morning with drum beating by a cultural group from West Kwaio waking up Auki Township with the sounds of wooden drums.

After the parade, a traditional panpipe group then led members of the Malaita Provincial Assembly (MPAs), delegation from the national government which include the Ministry of Provincial Government and Institutional Strengthening (MPGIS) Permanent Secretary (PS) Stanley Dick Pirione, and PS for the Ministry of Traditional Governance Peter Mae.

Both the Malaita Provincial anthem and the national anthem were sung with the raising of the Malaita flag and the Solomon Islands flag.

After the opening prayer by Rev. Ernest Wasi, the Malaita Provincial Deputy Premier Glen Waneta gave the welcome address where he welcomed all invited guests and the Malaita public who turned up in numbers to witness the great occasion.

Three speeches were presented during the occasion with the first from the Malaita Premier Suidani, second from the MPGIS PS Pirione, and third from the guest of honor and Opposition Leader Mr.Wale which got a huge praise and reaction from the gathering public.

The Malaita People’s Log of Claims which was the highlight of Premier Suidani’s speech was later blessed by Rev.Silas Ramo before the Premier Suidani presented the document to PS Pirione and PS Mae on behalf of the national government.

The event ended with a presentation of gifts, and performances from; police brass band, Auki pathfinders, and cultural groups.

Invited guests concluded the event at Hotel Malaita with a lunch which saw MPGIS representative Robert Kaua took time on behalf of all guest and Malaitans to thanked the organizing committee of the event, and the Malaita Provincial Government (MPG) for successfully hosting Malaita 39th second appointed day event.