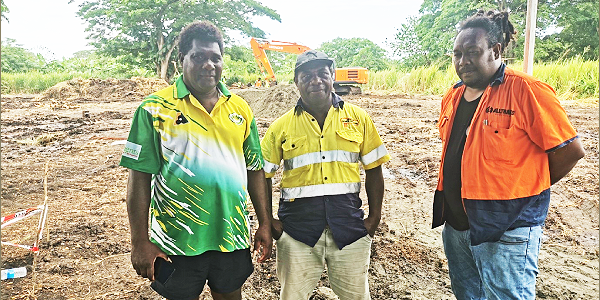 FIVE months or so from now, Guadalcanal women will have their own modern market in their own area.

Work is in full swing after five Guadalcanal Members of Parliament, businessmen and the young people of Guadalcanal decided to put their efforts together in building the nation’s newest market at Alligator Creek just east of Henderson Airport in Honiara.

Guadalcanal Provincial Government donated the one-hectare land for the project.  The plan for the market has been in the pipeline for years. But it never moved beyond discussion, largely because of financial constraints until last Sunday.

The group of MPs – Hon Baddeley Tovosia, Hon Peter Shanel, Hon Ethel Vokia, Hon Sam Maneka and businessman John Saki – all came together last Sunday to discuss the way forward. The group is going to get Hon Ishmael Avui to join as well.

“We simply told the Guadalcanal Provincial Government that we will build the market. Each MP will chip in to ensure the women of Guadalcanal have a permanent market of their own.

“They do not have to go to the main market in Honiara where parking space is always a problem,” a spokesman said.

Their move was prompted by events in the past week. Extensive rioting, looting and burning in Honiara, has simply blocked Guadalcanal women from going to Honiara due to the senseless uprising.

Soon some 20 young men came. Hon Shanel donated an excavator while a bulldozer was also made readily available.

“It was all voluntary work,” Chief Henry Saea whose house is next door to the market told Solomon Star this week.

And despite the rain, the entire area is almost ready, he said.

As a result of the uprising in Honiara, there were long queues outside the new market site last week.

“Our women were unable to move, Chief Henry Saea said.

“There were long queues of vehicle because of the trouble in town. So the men decided that the situation has created an opportunity to build a new market for our women.

An appropriate name would be given to the market when it is completed.”

“This will mean our women do not have to travel into town to market their produce,” Chief Saea of Taivu Village said.

Architect Coggan Kuare who designed the Solomon Port Unity Square at Point Cruz is working on the design for the new market, which will have three permanent buildings.

Mr. Kuare said there will be three market buildings – each for vegetables, fresh meat including fish and an Art and Craft.

There will also be an administration office as well as an ablution bloc. There will be parking space as well as tollgate and security to ensure the market is safe for everyone.

The group has extended its gratitude to members of the bomb disposal squad for removing unexploded ordnances without charge.

“We value safety above all other considerations,” Chief David Thuri of Tau Village, Tasimboko, said.

“So the market perimeters would be fenced so that everyone who comes here feels safe in the market.”