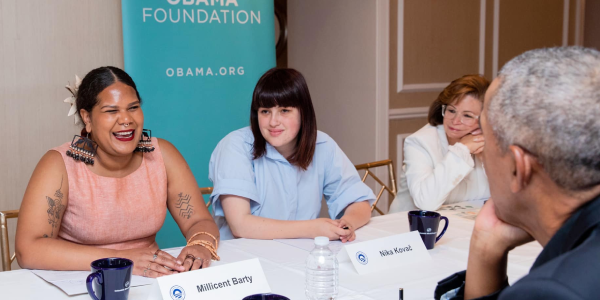 SOLOMON Islands very own Millicent Barty was given the opportunity to meet former president of the United States Barrack Obama.

Ms Barty was a recipient of the Obama Foundation Scholars Program – a program that gives rising youth leaders around the world the opportunity to take their work to the next level.

She was one of two selected under the program to meet with Mr Obama.

During the meeting she presented democracy in the context of Solomon Islands/Melanesia using traditional canoe metaphors to President Obama.

“Mr President, back home (Solomon Islands), we actually have two canoes; one that is made by our people with our Mana/customs, this one we inherently know how to care for, it’s what has sustained us… and; the other, the canoe of Democracy which has come from afar with its own cultures.

“It’s the main one we use but we do not know how to look after it. Our young democratic nation has been struggling with both canoes.

In a recent statement, Ms Barty said presenting Democracy in the context of Solomon Islands/Melanesia using traditional canoe metaphors to President Obama “will always be one of my greatest achievements”.

“The only way I was comfortable to do this was to turn the opportunity into a ‘Kastom Tok Stori’.

“Incredibly happy President Obama resonated with the metaphors,” she said.

As the program ends, she thanked Obama Foundation and Columbia University in the City of New York – World Projects for this once in a lifetime opportunity.

“I am truly blessed to be selected to share our perspective and my thoughts on Democracy, this one canoe, and how I’m rethinking my work around it.

“The journey to getting here has very much physically been a lonely one. Of course many people have helped along the way, but ultimately, we are all in our own canoes.

“The hard work, courage and determination to paddle against the current, must always come from within you. You are a powerful fragment of your ancestors and the Source – their wisdom is alive in you

“I leave the USA knowing my canoe is amongst many great canoes in an ocean full of hope!

“As we paddle together against the currents and tides for change, I know I’m not alone and this gives me great courage and strength,” Ms Barty stated.