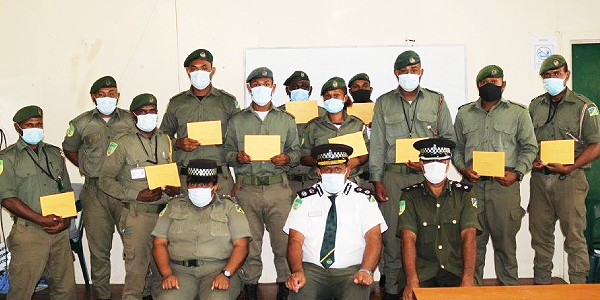 SEVENTEEN of the Newly Enlisted Correctional Officers (NECO) have received their confirmation of appointment on Tuesday this week.

CSSI commissioner Gabriel Manelusi thanked the commandant, CSTC director and staff for supervising and assessing the officers during their two years’ probation.

He also congratulated the 17 officers for their high level performance and urged them to conduct their duties based on the three basic principles of Jesus which were “words, action and obedience”.

“Word is a powerful principle of Jesus as He used words for healing, comfort and encouragement.

“Action is the second practical principle of Jesus demonstrated by his life on earth and the final principle was simply to obey what He was mandated to do,” Mr Manelusi told the new correctional officers.

He added that in all they do God is watching their action, listening to their words and their obedience to God is through the fulfilment of their duties.