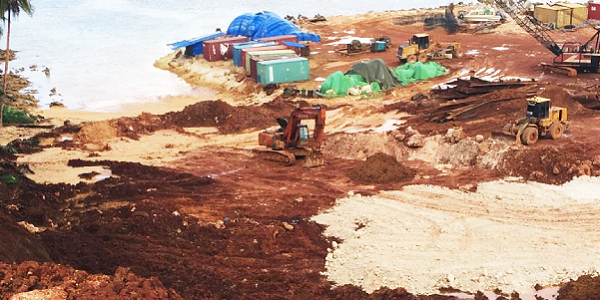 Senior Ministers and a top official face arrest within days

One of the two Ministers could be arrested as early as tomorrow, Monday 01st August. The Minister allegedly faces 21 charges relating to funds from the bauxite mining operations on West Rennell, Renbel Province, according to police.

“It will be on the Solomon Star newspaper on Monday. These charges relate to funds from the Bintan Mining (SI) Ltd operations,” the police insider said.

The potential arrest of the other senior Minister and the top official would follow. Police are finalising details of their charges, police insiders said.

Bintan Mining (SI) Ltd is believed to have gone into liquidation and has appointed an Australian liquidator.

The alleged looming arrest seems to be linked with an earlier report of a growing revolt within the ruling DCGA coalition.

In mid July an internal mutiny spearheaded by a growing number of disgruntled Government Ministers was brewing. The revolt largely over money was a move which had threatened not only the solidarity but the leadership of the DCGA ruling coalition.

Up to 10 Ministers were reportedly threatening a mass walkout unless Prime Minister Manasseh Sogavare sacks the Minister of Mines, Energy and Rural Electrification, Bradley Tovosia immediately.

Sources told Solomon Star then that the growing revolt was over money.

It stemmed from deep suspicions held by some ministers within the ruling coalition that only a handful of government ministers at the top echelon were benefiting from deals struck by the government and large payments made by investors.

“The Ministers could take it no longer,” the sources said.

Minister Tovosia told Solomon Star at the time he was not aware of the move to oust him.

When approached in a text message on Saturday to see if he is aware of the reported impending police action, Minister Tovosia simply said, “No idea.”

Others said the police move, if true, has the finger print of the Australian Federal Police [AFP] and the United States spy agency, Central Intelligence Agency (CIA) written all over it because of the security pact Solomon Islands and China signed in May this year.

There have been calls for a regime change in Honiara following the pact signing.

In Australia, there were calls by some individuals for an invasion of Solomon Islands because of claims the security arrangement provides naval bases for Chinese military ships on visits to Solomon Islands.

Solomon Islands and China have strenuously denied the charge.