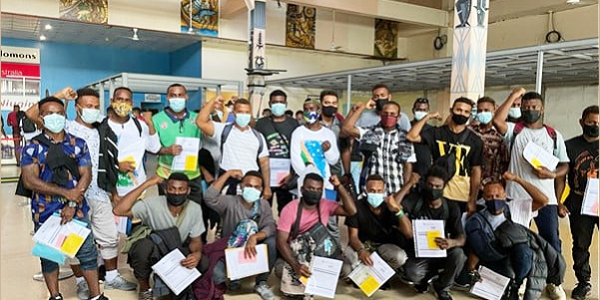 THE number of Solomon Islands nationals joining the seasonal workers’ scheme in Australia and New Zealand is expected to eclipse 5, 000 by December this year, according to government projections.

Senior government officials told a news conference in Honiara two days ago this projection is based on a number of factors, including good reputation our nationals have established with their employers both in Australia and New Zealand.

The increase has manifested itself in the number of passports being issued to seasonal workers since 2021.

A total of 13,300 Solomon Islands passports were issued in the period from 2021 to 2022 raking in SBD$10.7-Million into government coffers and the national economy, according to the Permanent Secretary of the Ministry of Commerce, Labour and Immigration, Riley Mesepitu.

Mr Mesepitu said 90 per cent of the 13,300 passports were issued to seasonal workers. Ten per cent accounts for other Solomon Islanders travelling on businesses, conferences and or training.

In January to July of 2022 alone some 4,500 passports were issued, earning the state coffers some SBD$4.7-Million.

Mr Mesepitu said these figures show an increased demand for passport and his Ministry is looking at ways to address the high demand.

One of the ways being considered is the creation of mobile passport units, with bases in provincial capitals such as Gizo in Western Province and Auki on Malaita because of its high population.

This will be rolled out soon, Mr Mesepitu said.

To meet the demand for passports, the Permanent Secretary said his Ministry has placed an order with IRIS, a Malaysian technology company connected with the electronic passport machine at the Henderson International Airport.

IRIS is also connected with the executive housing estate development at Mamara west of Honiara. This high-tech electronics company would provide an additional server and printing machine for the processing of additional Solomon Islands’ electronic passports under a 20-year deal.

He did not disclose how much the 20-year deal would cost Solomon Islands taxpayers.

He said due to the high number of people applying for passports to go on seasonal work in Australia and New Zealand, his Ministry has allocated Mondays, Wednesdays and Fridays to deal with seasonal workers applicants alone.

Other passport applications would be received on Tuesdays and Thursdays.

He said a passport costs $1, 000. However, he said those wanting to fast-track the processing of their passports can do so but at an additional cost of $300 to cater for extra hours worked by his passport staff.

He said a Solomon Islands passport is valid for ten years.

By Charles Kadamana and Alfred Sasako