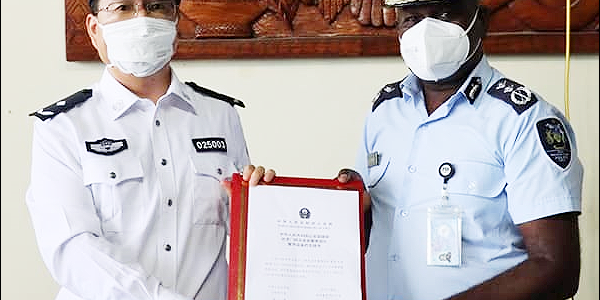 The donation was handed over to the RSIPF Deputy Police Commissioner Ian Vaevaso from the Chinese Police Liaison Team leader Commissioner Third Class Zhang Guangbao at the Honiara International Airport.

Commissioner Zhang said the health and safety of  their RSIPF colleagues has been a great concern for them.

“Since the outbreak of pandemic, the RSIPF has been fully engaged in lockdown and rollout related operations, while dedicating themselves to the safety and security of the SI people,” he said.

“Since my team arrived in Honiara in late January, we have been keeping close communications with the RSIPF.

“In light of the rapid virus transmission among their officers and men, we immediately coordinated with the Ministry of Public Security of China for 20,000 RATs as part of emergency assistance to RSIPF.

“We hope that could offer a hand to our RSIPF colleagues and help them get through current time of hardship.”

He said the RSIPF will be ready to strengthen its cooperation with China, to enhance its capacity in both maintaining social security and fight against COVID-19.