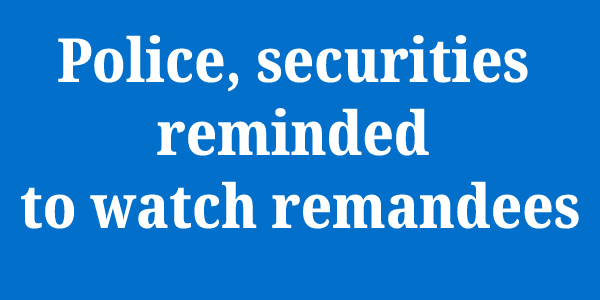 POLICE officers and court securities are reminded to keep an eye on defendants who are remanded in custody and waiting to be transported to Rove Correctional Centre.

Principal Magistrate Felix Hollison made this friendly reminder yesterday when dealing with the matter of a young man who had escaped from Honiara Magistrate’s court last month whilst waiting to be transported to the correctional facility at Rove.

He said there normally should be two police officers where one should always stationed around the defendants whilst waiting for the court to process the remand forms.

“Court securities should also assist the defendants as well,” he added.

The teenager who stole $400 from a vehicle parked at the Honiara Central Market was yesterday remanded in custody yesterday for escaping lawful custody last month.

On 21 December 2021, the accused was brought to court under a warrant of arrest where he entered a guilty plea to the simple larceny charge against him.

The warrant of arrest was issued for him on 3 December 2021, after he failed to turn up in court.

After entering his guilty plea, the presiding magistrate made an order to have him remanded in custody to wait for his sentence.

However, whilst the court was processing his remand papers, the accused escaped from the Magistrate’s Court premises.

He was recently re-arrested for another simple larceny offence and having found out that he is the same person who had escaped from lawful custody, the accused was brought to court yesterday.

When asked by the magistrate what happened while he was waiting for his remand on 21 December 2021, he confessed that he ran away that day.

Principal Magistrate Felix Hollison then made a fresh order to remand the accused in custody.

Police Prosecutor John Saugaro told the court that the new charges of simple larceny and escaping from lawful custody is yet to be sorted out.

The accused is due in court again on January 18.