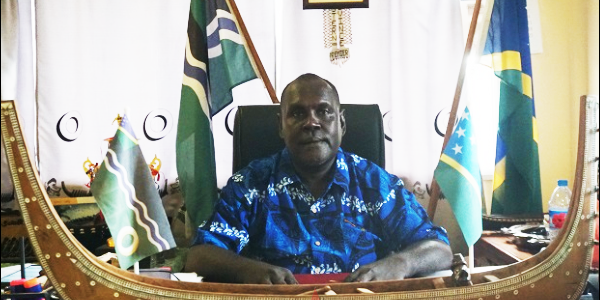 In a statement on Tuesday, Mr Mesepitu said these are the sorts of investments that will have lasting impact not only on Western Province as host but the country overall, in terms of the facilitation of trade, imports/export services and other logistical services and arrangements.

He made these remarks in light of the recent signing of the MOU between SIIP and Solomon Islands Ports Authority (SIPA) to support the upgrade of the country’s second largest port in Noro, Western Province.

Under the MOU, SIPA will deliver a detailed design to increase the capacity and efficiency of Noro Port which processes both domestic and international shipping, including passenger, freight and fishing fleets.

Premier Mesepitu said the priority placed on the need to not only meet international ports standard but to also increase the capacity of the current facility so as to cater for increased services and also reduce costs in terms of lead time and other associated costs.

Premier Mesepitu observed that learning from previous experiences, Honiara can no longer cater for international cargo and shipping requirements and services alone and given the lessons learned in the not-too-distant past, it is always good to have an alternative international sea port to cater for capacity and also to serve as an alternative port in the event of crisis.

“With the Soltuna’s facility at Noro, it is anticipated that this development will further our premium tuna exports to lucrative markets in Europe and elsewhere.

“The opportunities recently discovered for our tuna products following the recent Dubai expo is a testament to our ability to be able to participate in the international market.

“With approximately 85 per cent of global trade moved by sea, the relationship between international seaports and the economy has become symbiotic or intertwined.

“Ports are traditionally perceived as global economic engines, trade facilitators, important points in the supply chain, access for the global transport network, as well as catalysts of regional development,” the premier said.

It is in this light that Premier Mesepitu envisioned the economic benefits that will be generated from this development, not for Western Province only but for the entire country as a whole.

Premier Mesepitu said being capital intensive, ports have a top priority for trade and economic improvement, as they lie in the transportation interface between land and water.

Premier Mesepitu in welcoming the initiative rendered his appreciation and thanks to the government and people of Australia.

He disclosed that Australia has been a true friend and he proudly acknowledges the Gizo main market as one of the first projects that Australia directly partnered with the provincial government to implement.

He also looks forward to the proposed multi-agency facility to be constructed at Shortlands to be another spine to this mutual relationship between the people of Australia and Solomon Islands.

The SBD8.5 million (AUD1.48 million) project was approved by SIIP’s joint Australia-Solomon Islands Steering Committee in March 2022, with the design expected to be completed by July 2023.