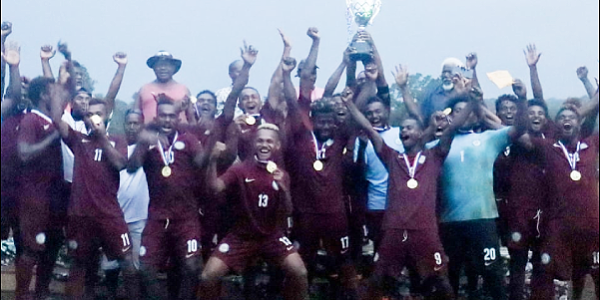 Raeao FC and St Michael’s Hunanawa Netball teams have been crowned Champions at the East Are Are 2021 Sports Tournament held at Hautahe village.

All top four teams in both the football and netball completions took home prize money as well.

Consolation prizes for outstanding performances during the tournament were also given, as well as gold, silver and bronze medals for the first, second and third placed teams.

Raeao FC took home the Sir Peter’s Cup in a football tournament that saw 24 teams and some 620 footballers participating in 68 matches.

The over 700 athletes and their officials who convened in Hautahe village represented communities that covered the breadth and span of East Are’Are Constituency from Manimaua in the south to Foulofo in the north of constituency.

The Sir Peter and Lady Margaret Cups were donated by the Kenilorea family who were represented at the tournament by the Member of Parliament (MP) for East Are Are, Hon. Peter Kenilorea Jr.

Hon. Kenilorea Jr. referred to the tournament as a legacy tournament having its origins in early 1980s being sponsored by the first MP for East Are Are and the nation’s first Prime Minister, late Sir Peter Kenilorea.

“It is truly an honour for me to continue this rich legacy of the Christmas period tournament for the people and the youth of my constituency, in particular, to come together and enjoy a few days showcasing of their skills and talent for the constituency to witness.”

The host village of Hautahe partnered with the East Are Are Constituency Office (EACO) to successfully convene the six day tournament.

The EACO assisted the community in the out use of materials for a brand new netball/futsal/volleyball concrete court. The prize money and fees for the officials who officiated the games were also met by the EACO.

The Chairman of the Hautahe host organizing committee, Mr. Moses Hunui, stated that “the 24 football teams and 12 netball teams is the highest ever participation of teams in these tournaments.”

He further added that, “the committee was very excited to host the games and were very pleased with the cooperation of all officials, teams, and supporters who visited their village over the tournament period.”

He also thanked them for their positive spirit in sport.

The tournament was the first one in a rural setting to be live-streamed. Viewers from all over Solomon Islands, including in the Pacific region Australia and New Zealand, as well as countries as far away as the USA took in the action online.

In all, close to some 100k views have been recorded to have viewed the action online.

Hon. Kenilorea stated that, “the Hautahe tournament has been the best tournament and I recognize the hard work of the community, the organizing committee and the chiefs and elders of community.”

He also announced that the 2022 tournament will be held in Manawai village.

Major sponsors and partners of the East Are Are sports tournament included, Our Telekom, Bulkshop, SIPA, and Tongs.