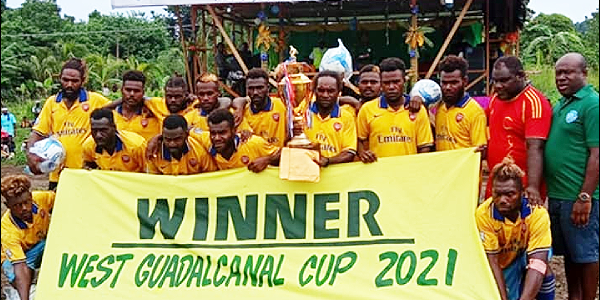 The tournament kicked off during the Christmas season and later coincided with the New Year celebration.

Sato Kings gained victory after defeating HM United in the grand final showdown to claim the trophy and cash prize of $20,000.

In losers final Uncles United and Ravu FC battled for the third and fourth place.

In the end it was Uncles United that secured the third place and smiled away with $7,000 cash.

A total of 16 teams participated in the tournament.

The weeklong competition featured football for men and volleyball for women and girls.

Speaking during the closing ceremony Member of Parliament (MP) for West Guadalcanal Anthony Veke said he will always support and sponsor the tournament.

“I will always help and supports this tournament in every year,” he added.

He further encourages all young men in the constituency to develop their skills and talents by participation in sports competition and prepare for 2022 competition later this year.

Veke said unlike other past tournaments, the 2021 competition aims to become an annual for event young people in the constituency to continue develop their talents and skill in the years to come.