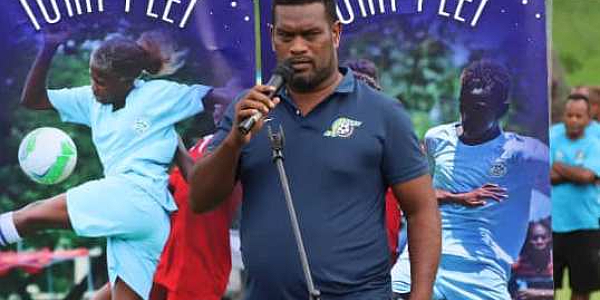 SIFF Vice president Marlon Houkarawa delivered his words of acknowledgement during the awards presentation of the Iumi Plei U14 championship at the Lawson Tama after the finals.

“Thank you all the PFAs for making your U14 teams available for this tournament.

“I would also like to thank the officials and team management for a great achievement indeed.

“Thank you to all supporters and fans as well for making this tournament an exciting one,” he said.

The theme for this year’s Iumi Plei edition is “Powering the future generation through football”.

Houkarawa said SIFF as the custodian for football development in country support and make sure kids are part of the football ecosystem.

He acknowledged the support of key sponsor, Solomon Power for coming on board and helping in the development of football for the country’s future football players and leaders.

The SIFF vice president highlighted that the Iumi Plei program has so far reached 47 constituencies.

Houkarawa concluded his speech by encouraging all the kids to continue excel in football and education which he said plays an important role in their football careers.

Chairman of the Solomon Power Board, David Quan also shared the same sentiments acknowledging the winners of the tournament and extending his acknowledgement to the parents

“On behalf of Solomon Power, we are excited, humble and honored to be here to witness the finals of the Iumi Plei National Championship and the awards presentation.

“Thank you to the officials, parents for supporting our kids because they are the country’s future leaders.

“Hopefully they learn not only soccer skills but also the health side of football and the discipline which is very important,” Quan said.

Golden Ball – Adrian of Western U14