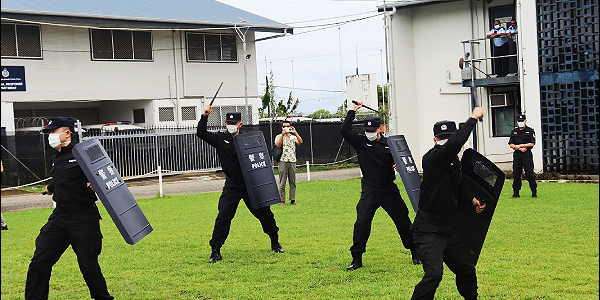 Solomon Islands is working to broaden its security and development cooperation with more countries. The approach taken by the country is in line with its 2020 National Security Strategy and the Country’s Foreign Policy of “Friend to all, enemy to none”.

The Government recognizes the state’s responsibility of protecting its people from fear and to live in dignity. Broadening partnerships is needed to improve the quality of lives of our people and address soft and hard security threats facing the country.

Solomon Islands values its 2017 Security Agreement with Australia, it is the country’s first Security Agreement. In diversifying the country’s security partnership including with China, the Government is working to sign off and implement a number of development frameworks with China to further create a secure and safe environment for local and foreign investments including Civil Aviation Services Agreement with China, Expanding Trade under Non Reciprocal Trading arrangement with China and sending more students to China for tertiary education in addition to those that left our shores this week.

Solomon Islands continue to preserve its Security Agreement with Australia as it develops and deepens its relations with all partners including with China. Solomon Islands recognize and appreciate the presence of Australia, Fiji and New Zealand Security Personnel covered under the Solomon Islands – Australia Treaty and a bilateral arrangement with Papua New Guinea which is being finalized. We thank the four countries for their presence in support to the Royal Solomon Islands Police Force (RSIPF) and the people of Solomon Islands.

Solomon Islands also applaud all development support and assistance from all partners including China, Australia, New Zealand, Japan, United States, and Indonesia amongst others.

Fiji has a shared history of service with Solomon Islands under various arrangements including in the recent past under the Commonwealth, RAMSI and now Solomon Islands Assistance Force (SIAF). Solomon Islands hope to see a sub-regional arrangement in place to respond to any form of warm or hot threats facing the sub region.

The country is located in a global hotspot where the impact of climate change is three times the global average. It is still going through its nation building process and has placed much focus on improving the quality of lives of our people, indirectly addressing and overcoming stresses of a diverse society to achieve social cohesion.

More development cooperation is being sought within and externally to ensure the country is put back on track especially during this difficult time with the impact of COVID-19 on people’s lives, building the economy including damages caused by the recent riots and looting and the population’s wellbeing.