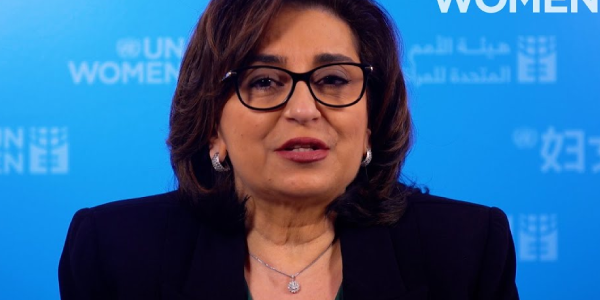 Bahous made the call in her statement on the International Day for the Elimination of Violence against Women last Friday.

She said five years ago, the global ‘MeToo’ movement brought new urgency and visibility to the extent of violence against women and girls.

“Millions of survivors came forward to share their experience. They forced the world to recognise a reality that shames every one of us. Their courage and voice led to a powerful collective activism and a sea-change in awareness.

“This wake-up call, alongside other invaluable initiatives around the world, continues to resonate. Grassroots activists, women’s human rights defenders and survivor advocates remind us every day, everywhere.

“They are revealing the extent of that violence, they collect and shape statistics, document attacks and bring the violence that happens from the shadows into the light. Their work remains as crucial as it ever was. They offer us a path to bringing this violation of women’s rights to an end,” Ms Bahous underscored.

Ms Bahous said the work of women’s rights movements and activists is the bedrock of accountability and making sure that promises made many times become reality.

“They are mobilising and they are powerful. We celebrate them today.

“The evidence is clear. We have to invest urgently in strong, autonomous women’s rights organisations to achieve effective solutions.”

She said this lesson was taught to us most recently during the COVID-19 pandemic, adding that countries with powerful feminist movements, stronger democracies and more women in parliament were the most effective in responding to the surge in gender-based violence, the shadow pandemic of COVID.

“In this area as in others, we see time and again that when women lead everyone wins. We all benefit from a more inclusive and effective response to the challenges we face.  We all profit from more resilient economies and societies.”

Ms Bahous said along side these efforts, men must step up and push forward.

“They must play their part in change. They can begin where they live. It is an uncomfortable truth that for some women and girls rather than being a place of safety, as it should be, home can be deadly.

“The latest global femicide estimates presents an alarming picture, one made worse by COVID-19 lockdowns. Our new report, released with UNODC, shows that on average worldwide, more than five women or girls are killed every hour by someone in their own family.

“These deaths are not inevitable. This violence against women does not need to happen. Solutions are tried, tested and proven, and include early intervention, with trained, supportive policing and justice services, and access to survivor-centred support and protection.”

The UN Under-Secretary General and UN Women Executive Director said she has three calls to action which she believes are ‘our priorities and our essentials.’

She said these calls to action are the basis on which ‘we’ can push forward and make a reality of stated commitments to end violence against women and girls.

“First, I call upon governments and partners across the world to increase long-term funding and support to women’s rights organisations, to make commitments to the Generation Equality Action Coalition on Gender-based Violence and donations to civil society organisations through the UN Trust Fund and support to the Spotlight Initiative. Resources matter and the scale of financial support for this cause does not match either the scale of the issue or the statements of concern made by those in leadership roles.

“Second, I ask that we all, in our own ways, resist the rollback of women’s rights, amplify the voices of feminist women’s movements and mobilise more actors.  We can all be advocates and our voices combined can drive the change we seek. In doing so, we must also ensure the promotion of women’s and girls’ full and equal leadership and participation at all levels of political, policy-making and decision-making spaces.  Accelerated progress toward ending violence against women and girls is just one of the dividends.

“Third, I ask for the strengthening of protection mechanisms for women human rights defenders and women’s rights activists. No one anywhere, ever, should face violence or harassment for standing up for what is right and calling for what is necessary.”

Ms Bahous added: “We cannot let our determination to keep “pushing forward” for gender equality waver. Our goal of a world where violence against women and girls is not just condemned but stopped is possible. By pushing forward together we can attain it.”